Trip Down to Lazarides

Last week I decided to go on a short trip to central London to check out the two exhibitions at Lazarides. With the Outsiders now closed, the two shows took both floors at Rathbone Place. The first exhibition was by Marcus Jansen titled Whistleblower. The show picks up on the current theme of government surveillance, loss of privacy and Edward Snowden. The latest showcasing will feature dynamic paintings and mixed media landscape installations. Jansen’s subject matter questions a puzzling, fast moving world transformed through rich gestural paintings. The other exhibition was by French contemporary artist Ludo. Ludo presents hybrids, which are formed through articulating the softness of the green and the precision of the machine-like components, resonate and inspiring yet disturbing depiction of a dystopian outcome fueled by man’s hunger for natural resources. However, the canvases of the artist also emanate a strong message concerning the societal transformations of our reality.

‘Whistleblower’ occupies the ground floor and shows abstract landscapes – sometimes wrecked – and focuses on themes that usually characterise Marcus Jansen’s work, such as the Gulf War and war in general, increased surveillance and genetically modified food, or transitions and transformations. 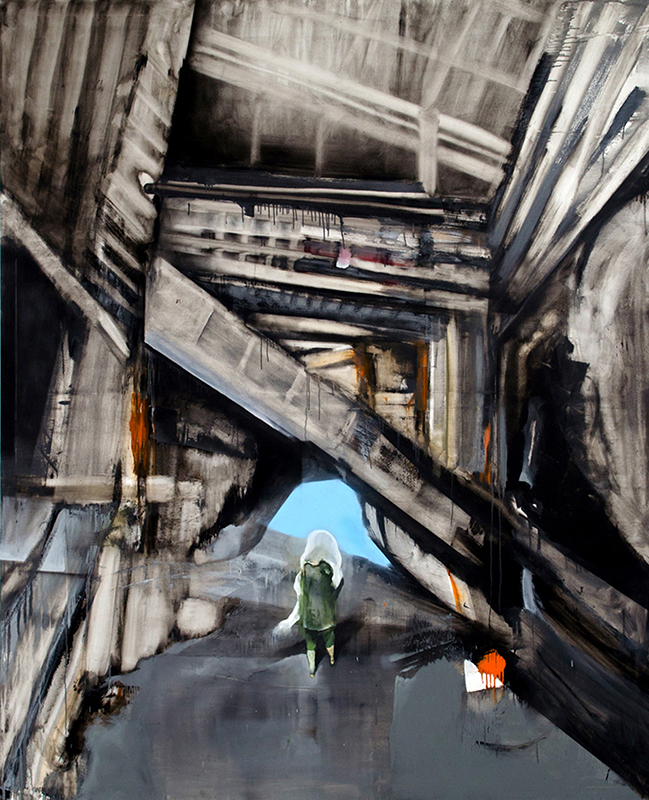 ‘Transition’, the big canvas right in front of the entrance door, conveys a disquieting feeling with its abstract architecture falling apart, almost crumbling on a little girl. At the same time, the blue sky that can be glimpsed from an opening in the collapsing building leaves room for hope and perfectly expresses the idea of the passage, the transition.

On the wall next to the the entrance door, there are two small and interesting works, with a 3D effect, by the title ‘War Torn’. Each one depicts a running kid in a very chaotic landscape obtained using splashes of dark colours and which clearly recalls the horror of war. The kids seem running for their lives, flying away from falling bombs. The 3D effect is achieved thanks to a cut canvas placed at the front of the artwork.

‘Sugar Coated Revolution’ revisits the famous painting by Delacroix, ‘Liberty Leading the People’, showing a not that subtle critique and irony, both in the title and the work itself. The leading woman is the only figure present in the picture, and it is recognisable against a background of brushstrokes that create different textures. Instead of the French flag she holds the American one and she also carries a kalashnikov, painted pink in order to look inoffensive.

The reference to genetically modified food is clear in two works depicting hybrid animals against a black background, and it can be especially seen in ‘Sheep/Swine’, which shows an animal with the head of a sheep and the tail of a swine. Almost in opposition to the hybrid series, some other works show pasted-up animals in a wild environment, always created through an expert use of brushstrokes and a contrast of colours.

The reference to the Gulf War of 1991, where Jansen took part as a soldier, can be found in a couple of artworks. One is a photograph with two soldiers, whose legs are melting down in paint, almost in an attemp to merge them with the background landscape. It looks as if they can disappear as men and be swallowed by their surroundings and become part of it. In the other one, the completely black figure of a man is even more disturbing, because it conveys the idea of an obliterated humanity.

There are also two works on wood, whose shape interestingly reminds of rifles. ‘Coastlines’ presents a post-disaster indented coast, with rubble scattered all around and only a little blue spot, representing the sea. ‘Through Night Visions’ is maybe one of the most colourful works of the show, with its yellow and green, and it seems to invite to viewer to plunge herself/himself in a surreal journey through subconscious revelations and night visions.

‘The Chaos Theory’ by Ludo

Proceeding to the first floor, visitors are warned to pay attention to the butterflies flying around the room that hosts the debut solo exhibition in London by the French artist Ludo. The little room is busy with both real and painted butterflies. On the wall on the left of the door, canvases are assembled around two rifle guns to form a huge butterfly. This makes immediately clear the idea behind ‘the chaos theory’, where the frail and ephemeral butterflies adapt themselves to the contemporary environment, undergoing a technological metamorphosis, thus becoming cyborg animals.

With a distinctive monochrome colour palette and neon green trademark running through all his works, Ludo presents various hybrid butterflies. The ‘e-Lepidoptera’ depicts a very sophisticated and advanced specimen of a matrix butterfly with a computer circuit board on the wings. Instead, in the ‘ExoSkeletor’ the wings hide a very intricate metal structure, typical of combat weaponry.

More mechanical butterflies merge their naturalistic features with technology and weapons such as ‘The Butterfly Knife’, where the knife has become an essential part of the wings, or ‘357’ whith a rocket launcher as the body.

‘The Skull With Butterfly Eyes’ shows a very interesting new specimen, a hybrid made of a human skull, whose eyes, mouth and brain are four cyber-butterflies connected among each other, and that suggests at the same time the extinction of the human race and the adaptation and survival of the butterflies.

Eagle Of My Darkest Sun

‘Eagle Of My Darkest Sun’ depicts the best result for metamorphosis and hybridisation. Here there’s a rich mix of different specimens and probably the one that can live longer. The skull of an eagle is on top of a human ribcage that ends in a scorpion tail. The whole body is suspended thanks to butterfly wings from which blades come out to protect the body. A perfect war machine!

In the last room, a video shows a series of cyborg-animals paste-ups, the reactions of people and faraway places from Ludo’s global street campaigns across Asia, Europe and the Caribbean.