Artists Engage the Automobile, an exhibition of automobiles transformed into sculptures by leading modern and contemporary artists in the years since 1970. The fourteen works on view will reflect art’s longstanding relationship with the car as a cultural icon and fetish object replete with physical and symbolic possibilities. Opening December 4th in Miami Beach, Florida, the exhibition will be presented on the top level of 1111 Lincoln Road, the dramatic open-air parking structure designed by Pritzker Prize-winning Swiss architects Herzog & de Meuron.

PISTON HEAD will run through December 8,th in conjunction with Art Basel Miami Beach, the annual art fair considered one of the most magnetic events of the international cultural calendar.

PISTON HEAD is powered by Ferrari.

Since 1886, when the Benz-Patent Motorwagen became the first modern motorcar, automobiles have shaped human experience. The quintessential machine of modern life, the car has defined cities, redefined our relationships to the natural world and one another, challenged technology, and fired the imaginations of countless artists in every discipline. Whether via the appeal of its speed to the Italian Futurists, or its mass-produced utility for Pop artists, the automobile has preoccupied artists consistently.

Objects on view in PISTON HEAD are not only about the car in contemporary culture, but are actual cars — fully realized sculptures comprised of vehicles that can roll on four wheels or once did. By removing these works from the white-walled conventions of contemporary galleries and museums, and placing them in the context of a working parking garage, Venus Over Manhattan highlights the way the participating artists have exploited tensions between refinement and brute power, aesthetics and utility.

The artists represented in PISTON HEAD have approached the car as both object and subject in numerous ways. Layered in Bondo, Richard Prince’s American muscle cars are monochromatic, neutral compositions reminiscent of Minimalist painting and sculpture (another brand of American muscle). Conceptual Art and Process Art come to mind when viewing Virginia Overton’s ruggedly elegant Dodge Ram, transformed by a mountain of sand to obscure most of the vehicle’s defining details.

In contrast to these more painterly works, the car of the late Viennese artist Franz West suggests a sculptural approach tinged with wit. West replaced the existing “Spirit of Ecstasy” hood ornament on his 1970 Rolls Royce Silver Shadow with one of his signature Passstuck sculptures. This small gesture transforms West’s personal ride into a commentary on the car as a conveyance of status, identity, and wish fulfillment. Bruce High Quality Foundation’s recently completed work – a pair of entangled Volkswagen Beetles – is a more suggestive take on cars as symbols of what the artists describe as “passion and suffering.”

Brute power has always been the companion of elegance in the world of automobiles and has been frequently addressed in 20th century art history. In a series of works called Compresions des Voitures and created from the 1960s until the artist’s death in 1998, renowned French sculptor César crushed automobiles in order to suggest the collision of classicism and contemporary art. PISTON HEAD will present one of these celebrated works, a “car brick” from among the group César exhibited in the Pavilion of the French Republic at the Venice Biennale of 1995. César’s work will echo in the contribution of Israeli-born artist and industrial designer Ron Arad, whose own car compression has rendered a six-inch thick ‘canvas.’

Power of another sort – the destructive power of entropy and chaos that result from neglect and mistreatment – will be on view in a contribution from Dan Colen and Nate Lowman. Their collaborative work, created in 2008, is a dilapidated four-door sedan, stuffed with TV sets. Lucien Smith’s sorrowfully pockmarked and crumbling vehicle once served as the target at a shooting range. With it’s lyric-like title of “The sound of the engine still running and for the last time they locked eyes, together again in the end,” Smith’s work draws chaos away from the merely sad, toward the Romantic. From such glamorous nihilism, PISTON HEAD comes full circle to the joyful, unbridled magic of Kenny Scharf’s painted dinosaur of a family vehicle. 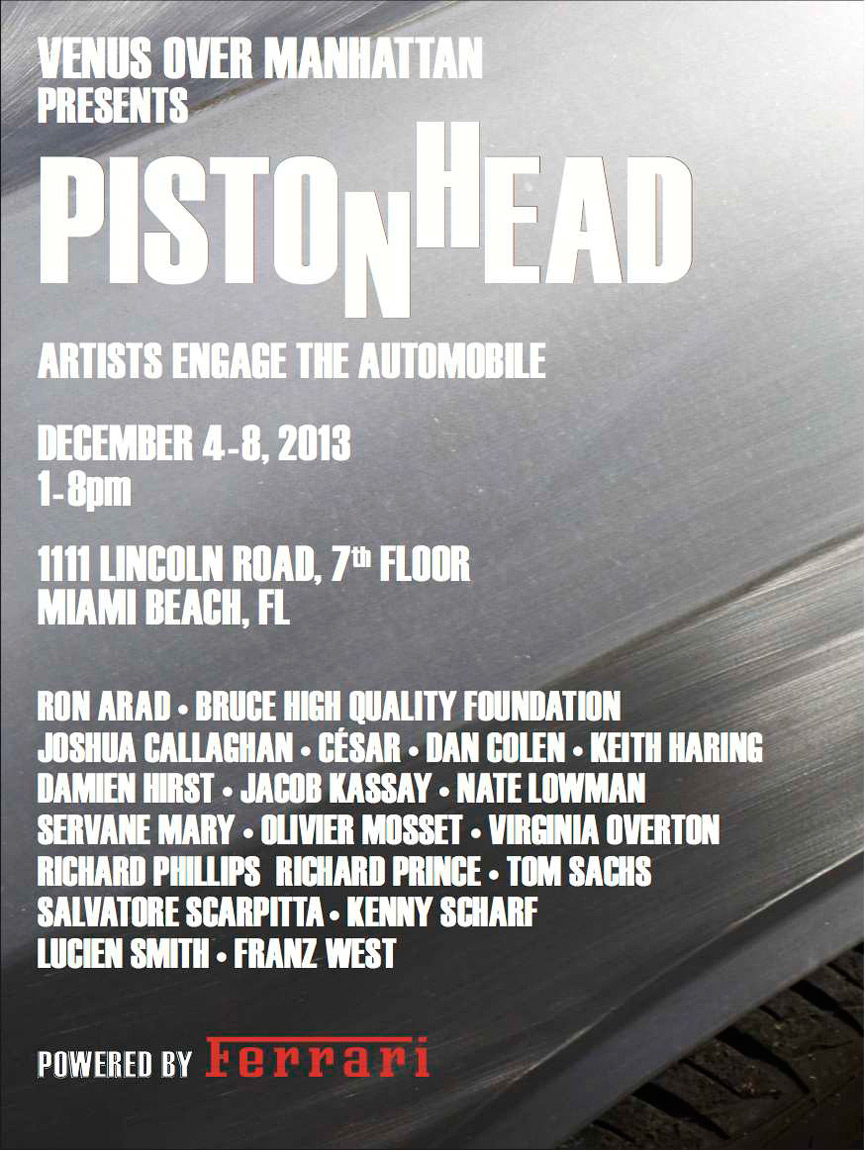