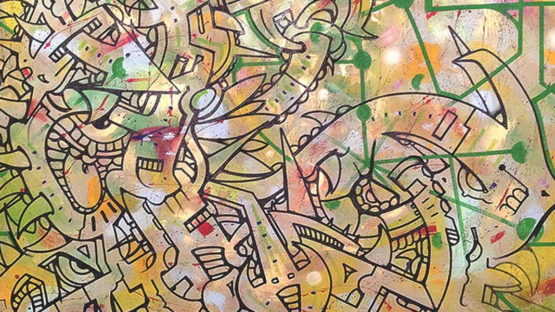 To pioneer something, it means walking through uncharted territories, embracing the unknown, but more importantly, being it means being creative. When the center of graffiti culture moved from Philadelphia to NY’s Washington Heights back in the 70s, an iconic chapter in the history of street art was about to begin. One of the people that marked this era was PHASE 2, The Bronx graffiti legend. The origin of his moniker is linked to a party he organized together with his friends. The gathering was so successful that they decided to arrange another one, naming it the PHASE 2. The artist could never remember why he was so stuck on the name that he adopted it as his moniker and began writing and signing PHASE 2.

Born in the Bronx, the third most densely populated county in the US, PHASE 2 was also known as Lonny Wood. He attended DeWitt Clinton High School, some sort of a greenhouse for early graffiti artists. Across from the school was a donut shop named Coffee Shop, where notorious street artists would meet and hang out in the early 1970s. It was also a meeting point for their excursions to the subway station at 149th Street and Grand Concourse, where they would watch IRT line tagged trains passing by. That place was quite important as it became a gathering point for a significant number of artists.

PHASE 2 emerged as one of the leading stylists of his time, handing out various styles to hundreds of young and aspiring writers that gathered at the famous bench at the 149th and Grand Concourse. He understood that for many disadvantaged urban teens, tagging was the only significant vehicle to represent their existence. Names of those youngsters would pop up on the most visible of places, not out of the desire to vandalize, but to please each other, with the ultimate gratification of receiving the accolades from those other artists. Speaking of the name for their artistic adventures, PHASE 2 has always preferred “style writing” to graffiti, as most people used that term to encompass the entire public form of art that was slowly emerging globally from the subways of New York City. Due to the negative connotations of the word graffiti, which originates from the Italian graffiari, meaning to scrawl or scratch, PHASE 2 would vehemently reject that term and refer to his craft as writing or style writing.

The training: a real deal on the streets

At first, PHASE 2 seemed more interested in music, as he was an early b-boy or innovator of breaking. He saw this dance movement as something that definitely took dance beyond its norms. The artist was actually DJ – ing back when some of the biggest street names weren’t in the business yet. He never made a name for himself in the world of music, but his fame was well on the way. He was introduced to the world of graffiti by his neighbor, famous Thomas Lee aka Lee 163d (in those days, monikers always had artist’s street number to it), and that is the world where he continued to live in, immersing himself completely into the urban culture. They knew each other well, grew up together, so the decision to team up came naturally. At the time, no more than twenty people were writing, so everyone was soon paying attention to them and picking up what they were doing. PHASE 2 is considered a first-generation of writers with subway art movement roots, intertwined with the larger hip hop culture developing in the Bronx of the 70s. He designed promotional flyers and posters for artists like Kool Herc and Grand Master Flash.

At the time he began writing, there was no more than twenty people doing it

The Bubble Letters and Deconstructing

PHASE 2 is best known for pioneering the so-called bubble lettering and its multiple variants. Also called softies, this lettering was used for the earliest subway pieces and gave material for the further development of other letter styles and what will later become wild lettering. All the styles came from Bronx – fat-caps, piecing, and the before-mentioned softies, so a lot of writers hurled themselves to the Bronx to see the major league Bronx-Manhattan trains and the writings they carried. Many modern-day graffiti artists found a base for their artistic round robin in PHASE 2’s creations.

In time, this graffiti artist’s style became more complex – leaving behind simple tagging and biting into hieroglyphically calligraphic abstraction. PHASE 2 created a method of deconstructing the letter, transforming it into hard lines, third eyes, horns, drills, spikes, Egyptian pharaohs, and dogs… Someone once said about PHASE 2 that he was the only one capable of writing his name ten times, creating 10 different pieces. Since 1972, PHASE 2 was a founding member of UGA (United Graffiti Artists), and he was also the president of the INDs crew and the Bronx chapter of the Ex-Vandals. From 1984 to 1994, he contributed to David Schmidlapp’s IGT TIMES, the first magazine dedicated to aerosol art. Together with David, PHASE 2 published Style: Writing from the Underground, exploring and explaining the aerosol art’s evolution and development.

In 2010, PHASE 2 painted kung fu stars from the 1970s for the Wynwood Doors. As he said, it was the way to make a symbolic homage to his fascination by the Asian action movies. The faces of Angela Mao (the first female action star in Hong Kong films), Gordon Lui, Ti Lung or Sammo Hung are made to shed some light on the viewer’s self-discovery path, inspiring him to search for his inner strength, as PHASE 2 did all of his life.

Bubble lettering was used for the earliest subway masterpieces

An unstoppable force of creation, PHASE 2 forever changed the world of graffiti and the world of art. His intuitive lettering inspired generations of the street artist who accepted his foundation and built their own styles upon it. He really was a legend and a true representative of the style writing, who began working in the streets before the concept of doing pieces was even conceived, paving the road for the ones that were yet to come.