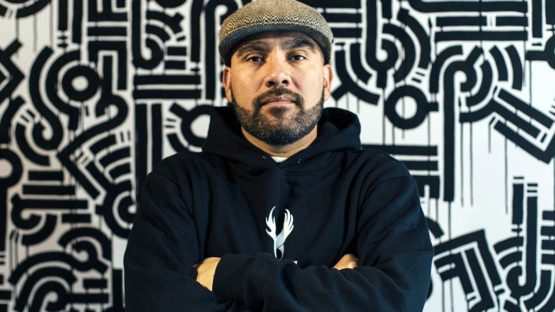 Aaron De La Cruz is artist/designer born in Los Angeles and raised in Fresno, California who is best known for his minimal yet cryptic approach — one which bridges the realms of graffiti and illustration. His work finds strengths in the reduction of his interests in life to minimal information. De La Cruz gains from the idea of exclusion, just because you don’t literally see it doesn’t mean that it’s not there.

He has been exposed to graffiti since the age of 7 and participated in what he considered graffiti since the age of 12. What he created then was a completely different purpose and direction. What he is creating now definitely has elements of graffiti but he personally doesn’t consider it as graffiti. Yet, he finds that people categorize his work in all kind of titles and he is very comfortable with that.

In his work lines/designs are completely freestyle. The only thing that is predetermined is the balance of negative space within the lines while creating an composition. He doesn’t use any sketches, although he does sketch a lot in his sketchbook which helps him to come up with new directions and ideas. The design layouts he chooses to use are sometimes predetermined with the space he is working in or with the emotions he is experiencing while creating the work. He always challenges himself to create the largest reaction out of viewers with his work but at the same time challenging himself by using the least amount of materials/mediums.

The overriding structure and the lack of deliberation while moving within creates a tension when encountering his work due to the almost computer generated grid like systems he creates by unplanned markmaking. The act and the marks themselves are very primal in nature but tend to take on distinct and sometimes higher meanings in the broad range of mediums and contexts they appear in and on.

Never discouraged by large walls, Cruz’s latest work looks to the walls of The Hundreds‘ LA headquarters as canvas. Painting Editor-in-Chief Luis Ruano’s office, the mural builds off of the Bay Area artist’s trademark style, enlisting subtle color tones synonymous to the brand in its rendition. Also, he went to Asia for working on  POW!WOW!TAIWAN  project.

He would like to have an entire city street in Mexico paved with his designs. Also, he is interested in working with public space and large scale spaces so the hard part is just making that happen.