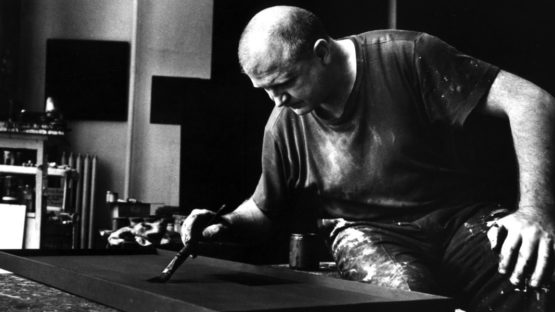 The advocate of the philosophy he called Art-as-Art, Ad Reinhardt was a prominent painter, writer, critic and educator whose work has been associated with the Abstract Expressionism although it had its origins in Geometric Abstraction, announcing the Minimal and Conceptual Art and Monochrome Painting. As a member of the American Abstract Artists, he was a part of the group gathered at Betty Parsons Gallery that became known as Abstract Expressionism. Recognizable for his cartoons that made fun of the art, Reinhardt is also remembered for the Black or Ultimate Paintings that he claimed to be the “last paintings” that anyone can paint.

Adolph Frederick Reinhardt was born on December 24, 1913, in Buffalo, New York. He showed an interest in art from his early childhood, working as an illustrator for the school’s newspapers. Rejecting several scholarships from art schools, he chose to study art history at Columbia University in New York, under the famous Meyer Shapiro who gave him a solid background in theory and humanities through latest trends and contemporary approaches. Shapiro also had a great influence on Reinhardt’s political views, introducing him to the radical leftist Marxist believing that he adhered for the rest of his life. In 1935, he began artistic training at the national Academy of Design and at the American Artists School in New York, falling under the influence of two prosperous painters, Carl Holty and Francis Criss who worked under the postulates of the Cubism and Constructivism.

Strivings for an Absolute Abstract Forms

During the late 30’s Reinhardt was among the artists employed by the government WPA project, which proved to be important for his further career, considering his acquaintance with Willem de Kooning and Arshile Gorky with whom he became a life-long friend. Creating in a realm of the geometric abstraction, his work starting to show the aspects of gestural abstraction. In this period, he worked a freelance illustrating job for several New York publications. Constantly striving for an absolute form of abstraction deprived of narratives or any kind of reference to anything outside the canvas, Reinhardt could no longer find himself in Abstract Expressionism, charging it for the opulence of emotional indications and a cult of the ego. Highly influenced by the art of Kazimir Malevich and Russian Suprematist theories, he became occupied with solid fields of color arranged in geometric forms of squares and rectangles, directly inspired by Malevich’s Black Square (1915). In his theoretical writings Reinhardt has brought these ideas into connection with complex philosophies, as Neo-Platonism, Negation Theology and Zen Buddhism.

Painting in Red, Blue and Black

Believing in an absolutely pure, ordered and balanced abstract art, in 1950’s Reinhardt began his experiments using the single color in the series of paintings. He started with Red paintings, then the Blue ones and finally came to the Black that marked his career for the rest of his life. Bringing the medium of painting to its limits of expression, he tended to create absolute zero, the end of the light. Challenging the viewer’s patience, making him stunned by the complete absence of narrative, palette, or any other element that everybody was used to, Reinhardt explained that everything is on the move, so the art should be still. He created collaborative art pieces, the ones whose existence were impossible without the viewer’s presence. As our experience of particular painting alters, instead of the inert images, these works became events. They change in every different feeling of their audience. Although monotonous on the first sight, his canvases are overwhelmingly full of color – their monochrome surface is composed of various shades of black. Drawing out the oil from the pigments, Reinhardt produced characteristic finish making the surface susceptible for absorbing the light into the darkness.

Ad Reinhardt as a Role Model for the Next Generation

Reinhardt used the satirical cartoons to emphasize the meaning of abstract art, fighting against what he described as “the disreputable practices of artist-as-artist”. His best-known cartoon named How to Look at Modern Art in America, created in 1946, tried to explain the essence of modernism through its history, from the Greeks, Persians, and Japanese prints, to the founders of modern art, Post-Impressionists Vincent Van Gogh, Georges Seurat, Paul Cezanne and Paul Gauguin. Mocking the discussion about representation versus abstraction, Reinhardt focused on the American avant-garde scene that marked the abstract art as degenerate and subversive. He was one of the few artists who approached Geometric Abstraction without putting it on the serve of design, decoration or advertising. Although striving to remove all references to anything familiar from his paintings, he believed that his art had a potential to affect the social change. Ad Reinhardt died of a massive heart attack on August 30, 1967, at the age of 53, in his New York studio. His oeuvre represents the basics of the evolution from the Abstract Expressionism to the Minimalism and Conceptual Art. Often neglected by his contemporaries, he became a prophet figure for the next generation, particularly influencing the work of Frank Stella, Donald Judd and Mark Rothko.