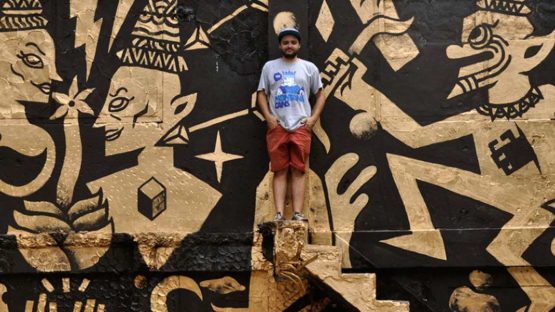 Pedro Campiche better known as AkaCorleone  is a Portuguese illustrator/graphic designer/visual artist who is known for his dexterity in using colors, typography, characters and forms, which he blends to achieve eye-catching compositions imbued with originality and an all-pervasive humor. Born  1985 in Lisbon, Portugal AkaCorleone  started out as a notorious graffiti writer in the Lisbon underworld. He has been exhibiting his work since 2010.

As a versatile young spirit, AkaCorleone has no limitations when it comes to mediums, techniques or formats. Being “self-confessed obsessive with all things graphic and visual,” he is creates works using foil, plexi, paint, spraycan, wood, objects, and basically anything that can visually improve and elevate his works and installations. Playing with colors, transparency of materials, dimension and depth, most of his output is sculptural and come to life when interacting with the observer.

Pedro is also a big fan of handmade work. He realised that on a computer based world it´s important to keep a handmade style and aesthetics, that´s why he can´t live without his moleskine, his pens, markers and watercolors…

“Painting walls and running from dogs gave me the addiction to typography, color, painting, drawing all day, planning things in advance, and mostly it gave me a chance to express myself without boundaries, something I try to apply to may daily life and work.”

With clients that include FormFortyFive, Montana & Optimus, AkaCorleone ‘s work has been exhibited globally and featured in numerous publications in print and online. Co-founder of STEPPIN STONE with his partner in crime Kruella D’Enfer, they run an online store, stocking illustrated goods including branded tees, prints, original artworks and Spanish lowbrow magazine Fine Rats.