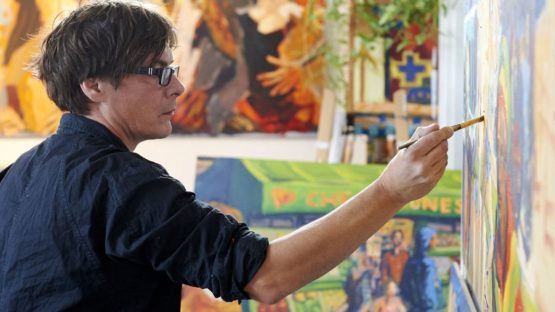 Born in 1961, Alexandre Akar received a diploma of the High School of Art Olivier de Serres (ENSAAMA) in Paris, in 1987. Since then, he has worked independently as a visual artist.
The artist has held his first solo exhibition with the Promo Art Galerie in 1987 in Saint Tropez, the south of France, where he painted a wooden fence in the street. Additionally, Alexandre began his carrier cross several exhibitions in Saint Jean de Luz (Pays Basque), directly in the street with several artists (Place Louis XIV).
His artwork has always been turned around urban way of life and people. He collaborated very often with architects and cities like Colombes and Gennevilliers to create pieces of art on walls or buildings.

Gennevilliers, the city where Alexandre Akar has a studio, sent him in Germany in 2010 for creating an artwork during the Ruhr European Capital of Culture. There he has begun his collaboration with Galerie Zeitlos, Berlin, which exhibits an important part of his artwork since 2011 permanently.