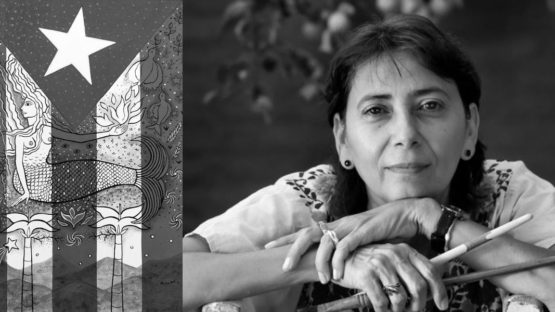 Alicia Leal Veloz is one of the most important and highly influential Cuban artists. Born in 1957 in Zaza del Medio, Sancti Spíritus, Cuba, she graduated in 1980 from Havana’s San Alejandro Academy of Fine Arts.

Leal works from studio-gallery she shares with her husband, renowned painter Juan Moreira, which is located in El Vedado, central business district and urban neighborhood in Havana. The spacious, high-ceilinged house with pale walls has typical Creole inner doors that partition off the rooms where wooden and wicker furniture are predominant. The location of the studio, very close to Línea Street, one of Havana’s main thoroughfares, and the park dedicated to John Lennon, seems to relate to Alicia’s work, full of universal symbols in a harmonious symbiosis with Cuban nature, mythology and idiosyncrasy.

Born in the central region of Cuba, where 16th century chronicles depict the presence of hundreds of demons that possessed the bodies and souls of terrified inhabitants, and the site of an important colony of immigrants from the Canary Islands, Alicia admits her debt to the rich popular tradition that spontaneously, and not consciously, emerges in her work. During her beginnings, after graduating from the San Alejandro Academy, the oldest art school in Cuba, she wanted to be an expressionist painter, but did not succeed in channeling her creative urges into this style. The search for her own personal expression led her to a primitive, naïve manner of bringing forth an inner world populated by symbols, tales and the desire to commune with nature. In Alicia Leal’s work, in which one can appreciate the appropriation of medieval color theory, spatial layout and a decorative delight in fabrics, floors and curtains reminiscent of Matisse, women play a central role, either providing refuge, as in the recurring image of the Virgin of Charity, patron saint of Cuba and eternal protector of mariners and fishermen syncretized with the sensuous Ochún of Afro-Cuban religions, in the poignant Death of Martí, where the Apostle of Cuban independence, in the arms of an angel embarks on the journey to immortality, in Chagallesque flying beings, who refer to other dimensions different from what is depicted, and even in the series dedicated to the circus where women participate in a microcosmic world in which the painter seems to perceive subtle similarities with society, behind the show’s lights and masks.

Alicia’s work is of a markedly narrative nature, her characters speak intensely, not only amongst themselves, but with the onlooker, who becomes an active participant and even protagonist of the painter’s unsettling scenarios. Intensely subjective, symbolic, exploring the subconscious and dreams, Alicia Leal’s work establishes a magnetic relationship with the viewer. Perhaps the key lies in the profound humanism and in the warm compassion, admixed with humor, with which Alicia Leal approaches the heartbreaks and pleasures of the everyday adventure of dreaming and living.

Alicia Leal held solo shows in Havana, Matanzas and Sancti Spíritus in Cuba, in Kuala Lumpur, Kingston, Houston and Berlin, and she was a part of various international group exhibitions. Her work is a part of many public and private collections all over the world.