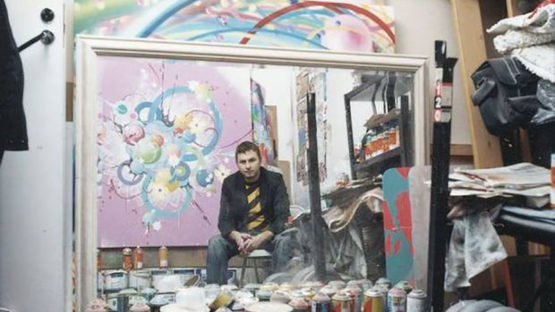 Studied Fine Art at Central St Martin’s London. Since graduating in 1995 Andrew McAtee has been featured in numerous exhibitions including shows in New York and Europe. He has also run numerous youth workshops working with teenagers who have challenging behavior.

McAtee’s work has been commissioned by Benson & Hedges, Nike and fashion designer, Antonio Berardi amongst others.

Andrew McAtee is in many ways is a reflection of his background as a graffiti artist and fine art painter. During his time at Art School he became increasingly interested in Abstract Expressionism and Pop Art.During this period Andrew was learning about Art history, working on canvas, as well as painting on the streets. This experience has shaped his work to the present day.

McAtee’s work is a hybrid style born of these combining factors, offering the viewer a vision into a world that is out of the ordinary, with a sense of escape into an inventive cosmic nebulous of upbeat excitement, like a worm hole into another world.

In part, the roots to his approach can be found in his graffiti past where McAtee painted bright, colourful, optimistic paintings in disused spaces. In this setting his aim was to shine and reach out among the debris with the intention of making something magical appear out of nothing.