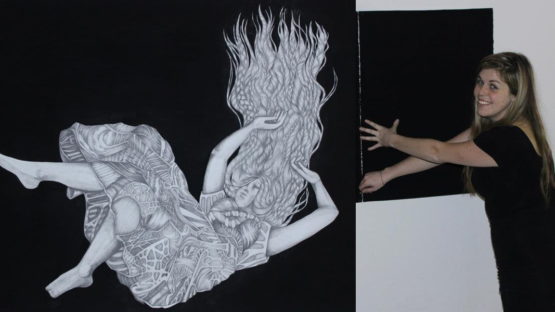 Annalisa Sher is an American artist born on January 4, 1991 in Petaluma, a small town in the North Bay Area. Her mother is a visual artist, and her father is a musician and a poet. Annalisa was interested in art since she was a child. About her childhood and beginnings in practicing art she said: “From the very beginning of my life I had access to art supplies and the encouragement to be creative. I grew up out in the country on a few acres of land and had plenty of space to run around and explore. I didn’t have many friends as a child so I spent most of my time lost in my imagination. I also attended a Montessori elementary school where the teaching of art and self-expression was highly valued.” Her art mainly shows the female figure, which she depicts in a very spiritual and symbolic way, and could also be said that contains an element of surrealism.

For her art Annalisa says that much of it is self-centered. She creates her art as a form of her own personal meditation, the most effective therapy, and the place in which she can explore the darker sides of herself with the greatest honesty. As she says, with her pencil and paper she is able to express others parts of herself that may not be as sunny. For her this is one of the ways of confronting issues around death, pain and suffering. Her creative process begins with a vision either from a day dream or a night dream or from the endless circulation of images running through her mind which she follows straight to the final piece, relying more on a flow of feelings than a precise planning with sketches. For her favorite material she cites a “good old black Bic pen”. As she stated in an interview: “It’s lucky for me that this is the case because I work as a waitress to make rent and I am able to borrow black pens quite often from my generous employers.” Her work is mostly done in gray scale because it simplifies things for her, letting her focus on the intention of the marks and the emotion of her imagery with much more clarity as she says. For her inspiration she cites her mother in the first place for who she says, strives every day to be more like, and also says: “I have many thanks to give to a young artist turned Angel, Phoebe Washer. Phoebe was a few years older than me and grew up in Petaluma as well. Her drawings and paintings are filled with wonder and beauty and speak deeply about the melancholy nature of life. I really respond to the emotions in her work and she will be an endless inspiration for me in my creative life.” About art in general, Annalisa says: “Art is something that must and always will exist. Art is life.”

So far, Annalisa’s art has been shown in galleries in San Francisco.