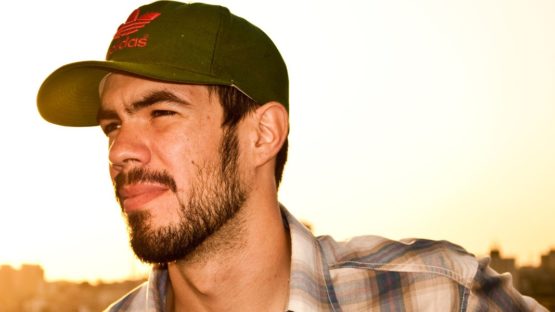 Apolo Torres, born in 1986, is a Brazilian contemporary artist, whose work ranges from painting and murals to posters and magazine illustrations. He got his BA in Industrial Design from Mackenzie University in Sao Paulo.

During his childhood Torres was influenced by cartoons and children’s books illustrations which he tried to replicate as best as he could, while later his attention was attracted by the graffiti writers from his neighborhood. During his studies, Torres worked as an assistant to artist who encouraged him to do his own works. Since then, he has done three solo shows in Brazil and numerous collective shows around the world.

Torres’ biggest influence throughout his life was his hometown Sao Paulo. Artist tries to convey the action of time and the changes that city brings, adding numerous layers of paint on the background of his works, and merging them to represent the textures of an old wall. His murals are fragments of urban scenes sitting on a fragment of wall, working plans and perspective, making the pictorial surface join the rest of the figures, whether in the form of ground, sky, water, wall or even the very surface of the screen.

Torres’ work as an illustrator was featured by clothing brands such as 775, MCD and Opera Rock, and was published in magazines like ZUPI, Time Out New York and Dirt Cheap Mag, UK. He has illustrated ad campaigns, murals, posters. His fine art work has been shown in several galleries and has been collected in the US, Italy and Germany.

He lives and works in Sao Paulo, Brazil.