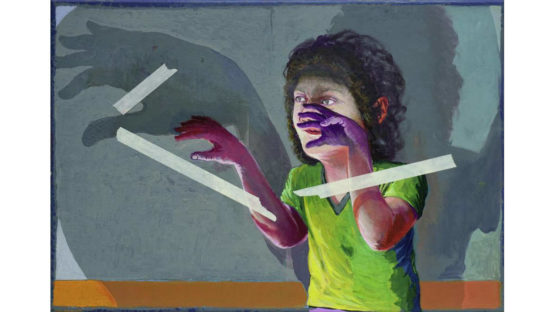 Arno Bojak is a painter with both body and soul. He is generally more interested in an artificialized depiction instead of copying reality in a naturalistic way. For him, a painting contains two elements: the story, and the interaction of the colors, so if you see something, say something. And he seems to hoard an endless reservoir of these stories and recollections, which he then projects onto large-sized canvases with technical perfection. Layer after layer he pieces his compositions together, contrasting the stuff of surrealist nightmares with quaint props and colorful banality.

The figures in his work seem restless in their search for the significance of their whimsical existence and appear in secret, partly stage-like rooms and settings. Although Bojak’s paintings bear many references to art and literary history, the precise reason for these disturbing events remains veiled in secrecy. Tied up in grotesque representation and overwhelmed by the richness of detail, it is hardly possible to elude the impact of these images.