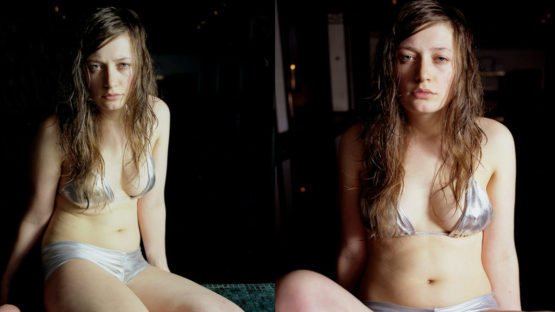 Unusual and sometimes even shocking portraits of the young girls in their imperfections, with bruises, tattoos, freckles, in see-through clothes or entirely nude, make Dutch photograph Arno Nollen a master in conveying the evocative in otherwise overlooked subjects. His un-styled models, in their uncomfortable age between childhood and adulthood, are not represented as objects, but illustrations of feminine power in everyday life. Nollen’s obsession with girls reveals them in different lights and away from every perspective. They are shy, provocative, innocent, self-assured, naïve, seductive, in fur coats, sexy lingerie, nude, fat, thin, blondes, brunettes, redheads, from the country or the big city.

Nollen graduated from the Rietveld Academy in Amsterdam where he was rewarded with the Esther Kroon for his graduation presentation. He was also nominated for the NPS Culture award. His works have been exhibited internationally and are part of important collections both in The Netherlands and abroad. He creates photographs, photo books and films which represent the colorful collection of young women. His personal obsessions, doubts, aversions and feelings often coincide with those of his subjects. At the beginning of his career, Nollen was primarily interested in portraying insecure girls in their indifference and awkwardness.

Being a Part of Arno Nollen’s World

Portraying these subjects with the look of fragile muses, Nollen provokes the viewer’s ambivalent feeling. He seeks a confrontational way of photographing, going into a comfort zone of his models. Using the repetition and multiple images he makes a series, creating a short stories or books. Aiming to emphasize the differences and similarities, Nollen calls the different sensations, from excitement to tenderness, disapproval and discomfort. His exhibitions tell a visual story with photographs, video films, archive materials, objects and lightning. As soon as the visitor enters the gallery space, he becomes the part of the Arno Nollen’s world.

Using the repetition, he emphasizes the differences and similarities

The Collector of Emotions

As he himself admits, he is always involved with girls, especially the young ones because of their body language and facial expressions. He finds their lack of experience something that is interesting to record. Nollen does not abide by any strict method or conceived concept, resisting any kind of rules or ideology. He’s not seeking for the absolute ideal of beauty, but the way to visualize the feelings. Calling himself a collector of emotions, his works evokes a wide emotional range, from intimacy, lust, eroticism and tension, to romanticism, tenderness and vulnerability. His photographs make a mixture of impressions that move between dream and reality, seductive eroticism and innocent nudity, prudency and provocative self-assurance.

The artist is represented by Green Flowers Art Gallery in Boulogne-Billancourt.

Featured image: Arno Nollen – detail of an artwork
All images courtesy of the artist