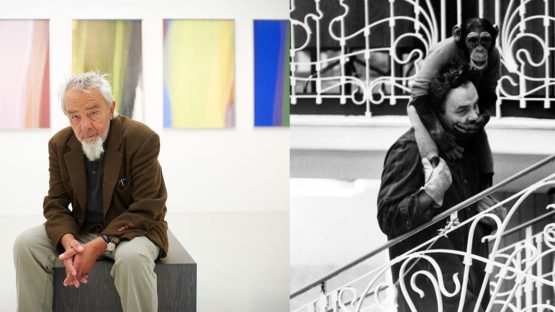 Arnulf Rainer is an Austrian painter, the founder of Art Informel in Austria, and best known for his ‘overpaintings’, developed in the 1950s.

He was born in Baden, Austria. Between 1940 and 1944 he attended the National Political Institute of Education in Traiskirchen, Lower Austria. In the art lessons, his paintings were inspired by aerial photography and cartographic landscapes with bomb craters, fires, tanks and aircraft, and avoided figures and faces. When his teacher tried to force him to draw from nature, he left the school in 1944 and decided to become an artist.

In 1945 he fled from the occupying Russian forces on a bicycle to relatives in Carinthia, where, over the coming years, a series of deserted landscapes were created. Until his school leaving exam, Arnulf Rainer attended the vocational school (building and architecture) in Villach, and discovered international contemporary art (Paul Nash, Francis Bacon, Stanley Spencer, Henry Moore) at a British Council exhibition in Klagenfurt in 1947. Rainer also became interested in Surrealism’s revolutionary theories, and was greatly influenced by them in his work. The potential of unbridled imagination held a particular fascination for him, in particular after his experience of dictatorship at the Nazi institute of education.

Despite lacking motivation, Rainer left the Villach vocational school in 1949 with good exam results. He then passed the entrance exam to do graphic arts at the Vienna Academy of Applied Arts but left the class on the same day because of artistic differences with an assistant professor named Korunka. He also applied to the Academy of Fine Arts in Vienna, a painting class, but three days after passing the entrance exam he left this class too, when his work was described as degenerate.

In the early 1950s, Vienna was experiencing strong influences from late Surrealism, later collected under the banner of the ‘Vienna School of Fantastic Realism’. Arnulf Rainer, under these influences, also created surreal drawings, but increasingly rebelled against the aestheticism of ‘Art-Club’. He founded his own group called the ‘Hundsgruppe’ (Dog Pack) along with Ernst Fuchs, Anton Lehmden, Arik Brauer, Wolfgang Hollegha and Josef Mikl.

In the summer of 1951, Arnulf Rainer travelled to Paris with Maria Lassnig, to meet André Breton – the ‘Father of Surrealism’, who, however, proved to be a disappointment. But he was excited about another movement in art: l’art informel. Moved by these works, Arnulf Rainer broke decisively with his Surrealist and figurative beginnings, and for the first time came to his abstract forms, which he termed ‘microstructures’ and ‘atomization’. From the ‘microstructures’ developed ‘centralizations’ and ‘central and vertical designs’ (sparse drawings created from just a few marks). A lack of material during this period led Arnulf Rainer to his first overpaintings of the works of others.

Between 1953 and 1959, Arnulf Rainer lived as an ascetic in his parents abandoned and unfurnished villa in Gainfarn, in Lower Austria. There he began the ‘reductions’, a group of works comprising stark monochrome black pictures with geometrically delineated areas  of white, which are seen as an initial step towards the overpaintings. In 1953 in Vienna he met a priest named Monsignore Otto Mauer, who later founded the Gallerie St. Stephan, which became a meeting place for the Austrian Avant-guard.

In the mid-1960s, Arnulf Rainer started his experiments with drawing under the influence of drugs and alcohol. The drugs and his intense involvement with painting people with mental illness led him to develop a hallucinatory, almost frenetic practice and unknowingly he drew on his own figurative, surrealist beginnings, but at the same time the experience of overpainting remained visible.

In 1966 Arnulf Rainer received the Austrian State Prize for Graphic Art and in 1968 the Museum des 20. Jahrhundert organised one of the first large retrospective of his works.
During this period, Arnulf Rainer had grimace photos taken with or without face painting (either in photo booths or by photographers), which in turn he then painted or overpainted. The grimacing and behavior of the people with mental illness, who he engaged with intensely, represented a rich vein of expressive possibilities. He wrote, “The faces I drew earlier all had impossible wrinkles, fake furrows, invented accents. I felt they were missing from the photos. As I painted them onto the cheeks, and then went for a walk, I felt like a new man (…) It wasn’t until I began to overwork the expressive photos of the farces that I discovered to my surprise: a bunch of new, unknown people, who were lurking within me, but who my muscles alone couldn’t

His committed search for new approaches to painting and his constant development of painterly strategies, accompanied by performative works and extensive writing, has led to Arnulf Rainer becoming one of the most influential living artists of our day.

In 1978 he represented Austria at the Biennale in Venice and was awarded the Grand Austrian State Prize in the same year, ‘in recognition of his accomplishments in fine art.’

Various awards and honors underline his status: the Pinakothek der Moderne in Munich dedicated a room to Rainer in 2002, where his work will be on permanent display. In the following years he won the Rhenus Kunstpreis for his complete works and in 2004 the Faculty of Catholic Theology at the University of Münster granted him an honorary doctorate. In 2006 he received an honorary doctorate in theology from the Katholisch-Theologische Privatuniversität Linz, and was the first non-Spanish artist to receive the Aragón-Goya Prize for his complete works.

He expanded his artistic practice by incorporating video and film and then took sequences from these films as a basis for his photographic overworkings. He also began work on ‘gestural hand paintings’ and later ‘finger and foot paintings’. This was also when his years of collaboration began with Dieter Roth: Mixed and Separate Art.