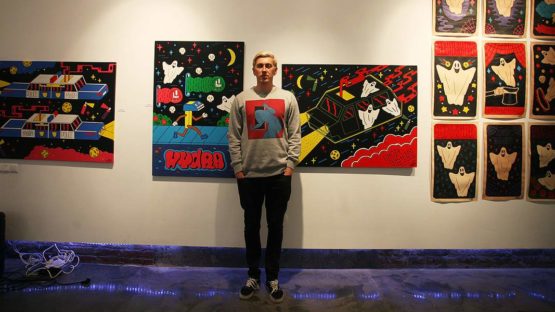 Artem Proot is an Ukrainian self-taught artist and illustrator who creates futuristic world inspired by street art, skateboarding, comics and character design. Proot was born in 1987 in Zaporozhye, Eastern Ukraine and since 2005 he lives and works in Kiev. He began his art career when he was only 15 years old, in 2002 he discovered street art and at the same time he started skateboarding. Of course, his works got influenced by skateboard culture that resulted in drawing designs for skateboards, as well drawing characters as punks, or skaters doing their tricks, and other stuff.

At age of 18, Proot became interested in animation, so the next few years he was making cartoons with pretty same characters. The next thing that caught his attention was graphic design. But, he got tired of it very quickly and in 2011, he decided to go back to basics. He quit his job at the office, where he was working as a designer, and began a path of an artist. He created his first works on canvases.

In 2012, he had his first solo exhibition, a series of works called “Celebra” inspired by devoted friends, skateboarding, youth, carefree and idle life. In the same year, Proot participated in youth festival, a group exhibition “I love Kiev 2012”.

During 2013, Artem worked on the creation of his second series “Hydra”. The plan was to organize an exhibition for the New Year, but in his country, the revolution has begun. Because of sad events and terrible situation, Artem couldn’t paint for 5-6 months.  In May, when the situation got better, he had a personal exhibition at the art cafe “Bacterium”, an underground and famous place in Kiev, where bunch of artists, writers, and musicians hang out and create together.

Next solo exhibition he had at the gallery “Bunkermuz” in Ternopil.

Not having a higher education, but love for art, animation, movies, 8 bit games, youth literature, as well as having the energy and ambition, Artem creates his own worlds, despite all the difficulties. He is a representative of the Ukrainian lowbrow scene, which in his country is very poorly represented.

“My art in the country is radical and located in the underground scene. I like to create work series, that way I can better understand and explore one or another subject.”