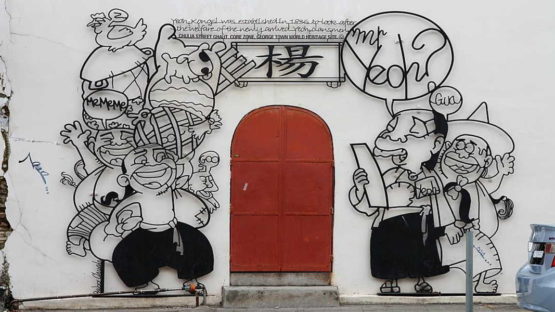 Baba Chuah is a street artist and cartoonist known for his “wire art” who is often mentioned when discussing the role of the comic Malaysia in the 1980s and 1990s. Although from a different cultural background, he understands the culture and he was very thorough with his comic drawings that characterize rural setting and Malay customs. He worked in line with the comic artist Zoy for “FANTASY “magazine.

“Baba Chuah George Town Caricature Sculptures” is a set of steel-rod sculptures placed at strategic locations in George Town. Chuah made his debut in the cartoon scene when he was published in Falsafah Batu Api in 1991. This led to the use of his work by Creative Enterprise for their “Fantasi” anthology series.

In 2000, Baba Chuah entered the international scene when his work, Midsummer Night’s Hunt, was published by the US publisher, Dark Horse, in Issue No. 156. Today Chuah continues to be heavily involved in the comics scene. So far, three of his caricatures have been selected for the street art commission by the Penang Island Municipal Council (MPPP) though the design company, Sculpture at Work.