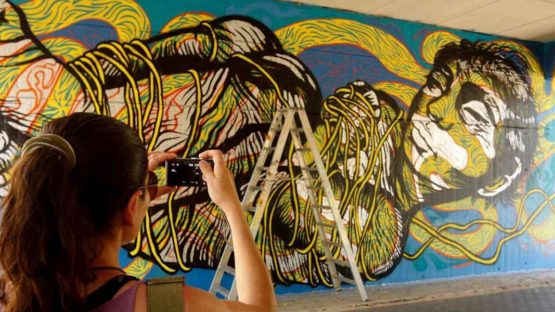 The nation of Colombia is often recognized for its vibrant art scene and rich culture, with many street artists calling this country their home. One such person is the distinguished graffiti artist from Colombia’s capital city of Bogotá, Bastardilla – a woman responsible for some of the most characteristic street art pieces in her country. Most of her work focuses on themes somehow connected to the difficult situations of Latin American women and the violent state in which parts of her homeland find themselves in. The smooth curves of the figures in her pieces which range in size have garnered her fans from all over the world.

The Reasons Behind Her Artwork

The development of Colombia’s graffiti began with the Civil War when artists wanted to express their frustrations with the political system, meaninglessness of fighting and other social issues. Ever since then, graffiti remained the main outlet for all the problems plaguing Colombia, serving as a means of poignant commentary on cultural and governmental concerns. Channeling her thoughts about gender inequality, Bastardilla’s artwork definitely fits into such a profile. Through unique graffiti pieces, she represents the front line against the trials of Latin American women and the general violence in South America. The artist once stated: In Colombia, violence is still something that’s very present. It’s a disease that continues to spread exactly like rabies, and I can’t understand where it all comes from. One of her strongest works concerning the theme of anti-violence is the mural in Mexico City – yes, Bastardilla has been known to work internationally – in which the artist depicted youth armed with pencils sitting on a book with the words we want them back alive written at the bottom. This piece was created in regards to the case of 43 university students who were abducted by police officers in Iguala and were subsequently handed over to gang members for execution. However, the women’s issues seem to be Bastardilla’s most prominent theme. The artist loves focusing on these subjects which aren’t often seen, are regularly neglected and purposely pushed under the rug. However, even though the themes are dark in character, they are ultimately depicted very positively as Bastardilla portrays the successful resilience of such women.

With unique glitter and thick expressive lines, Bastardilla’s graffiti has a masterful way of capturing light – which makes her work especially beautiful to behold during the night. Her work is full of life and energy, ultimately due to Bastardilla’s skillful usage of vivid colors – and make no mistake, the pieces she authored are some of the most colorful ones you will ever see. She normally focuses on one particular color that stands out and carries the entire energy of the piece. Another noticeable aspect of her work is the way she manages to use the surfaces to her advantage as her pieces change radically depending on where she decides to place them. Bastardilla likes to describe her graffiti as fruits of imagination, as specific windows looking at the backyard of her mind. Her graffiti are very intimate and even though they are confronting in nature, there isn’t a particularly aggressive note in them. Staying true to the old school rules of graffiti, Bastardilla has worked really hard at keeping her identity a mystery. Considering the focal point of her portfolio, such decision only emphasizes her graffiti’s core meanings. In one of the few interviews she’s done for an 8-part documentary series called Défense d’Afficher, Bastardilla comments that the idea of anonymity is particularly appealing in a world where everyone is promoting their own image. Obviously, she desires to put her work first without overcomplicating it with less important things such as who the author is.

A Different Meaning Of A Term Street Bravery

As a woman, I’ve had to fight against these types of realities- against the fact that people want to assault me, that I’m not taken into consideration for a lot of things. And I’ve had to fight against the world that is still turning mostly around men. Maybe these are the best words with which it is possible to describe Bastardilla’s artistic drives – all the woman fighting for change or suffering because of inequality. This street artist uncompromisingly shows us that the women of South America shall not be overlooked any further and that the time has come to stop all the violence that is plaguing this part of the world. A brave and a noble idea, but let us just hope that the world is ready to hear it.

Bastardilla lives and works between Italy and Colombia.