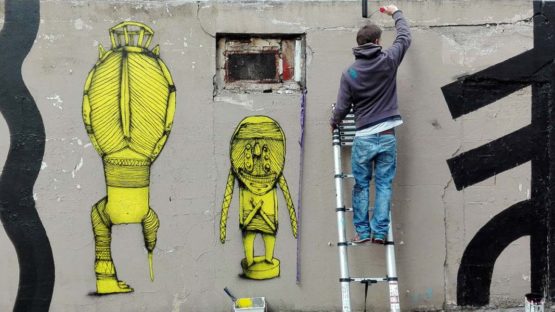 As someone who finds it disturbing to be described as a street artist, Bault explains that his artistic creativity can be seen in images, sound, videos, illustrations, and graphics. The wall is just a piece of the puzzle, sometimes in the first place, sometimes not, but always supportive and present. Without any particular theme, his drawings, graphics, and paintings represent a mix of his curiosities, often linked with similar ideas, and executed without any previous plans or calculations. The artist is famous for depicting surrealist creatures, monsters, hybrid animals, and weird characters. The scale of mediums ranges from walls and paper to wood and canvases.

The artist was born in 1978, and he grew up in the Aveyron region in the southern France, but the cultural input, vast possibilities, and friends have led him to Paris. His desire for art emerged by seeing inspirational and scholastic paintings of his father, since his childhood. Bault always liked fanzines and comics, written by Hara-Kiri, and Manara, but he was especially intrigued by Nicolas de Crécy’s comic books. He studied at the École des Beaux-Arts d’Avignon before moving to the School of Arts Décoratifs in Strasbourg. In 1997 together with his friend Depose, who showed him some great paint techniques, Bault made his first graffiti on the walls of Listel estate in Sète, which was an ideal place full of warehouses and wastelands. Despite the author’s academic background, he turned to graphics and video for a decade, and almost stopped drawing. Most of his inspiration comes from children’s books written by Christian Waltz and Olivier Douzou, but also from graffiti, like those seen in public toilets.

Bault made his first graffiti on the walls of Listel estate in Sète, which was an ideal place full of warehouses and wastelands

The Symbolism of the Animals

The large part of Bault’s artworks includes animals in some form, sometimes raw, and unfinished. Whether it is an elephant, a bird, an owl, or any other animal, it gives the artist a freedom that he can’t find when drawing humans. Twisting, scaling, and combining parts of different animals is more appealing than applying the same process on the human body. Drawer’s creations are mostly permeated with his ideas or interpretations of the society. The abstraction and absurdity are used to pass on messages to human beings, in a subtle and indirect way. The unique style is created by mixing acrylic paint and low-pressure spray, which expresses his imagination in the best possible manner.

Twisting, scaling, and combining parts of different animals is more appealing than applying the same process on human body

The painter’s approach reflects his desire to renew and develop himself. Diverse themes include a number of characters directed against the violent, polluted, and urban universe. Bault made graffiti and other art alongside Faya, Obez, and Casper of TG. His artworks are part of exhibitions and shows in numerous galleries and festivals in cities around the world.

The artist is represented by the Nicolas Xavier Galerie in Montpellier.

Featured image: Bault during the process of making
All images copyright of the artist; All images used for illustrative purposes only