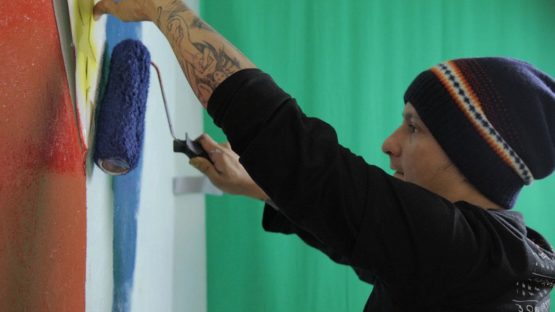 Ben NAZ was a Filipino-French Guerrilla artist and one of the most recognized street artists outside the Philippines. He was born in France in the late 70’s and migrated on the early 80’s back to his father’s homeland (Philippines) during the heavy political outcry.

Branded as “Manila’s Finest,” Ben NAZ’s dramatic, political scenes and heart breaking stencil works captured attention almost immediately. Depicting a struggle between the rich and the poor, deep-rooted and emotional images characterize eye-opening scenery to the people of the Philippines.

He was wittingly political and motivated by the cause, whether it be the Philippines, ‘Pinoy’ identity, freedom, equality, peace or life. His plight was to show the world the Filipino identity, his passion was art and his motivation was the state of the world, globally.

Ben NAZ took part in creating posters and murals for missing persons (including journalist, activist students) during his time in Manila. In 1994, he emerged as a graffiti artist railing against oppression and fighting for a Filipino identity and freedom. He was not well received by the ruling party who perceived his work as a vulgar attack on the state.  All that resulted with his leaving the Philippines. He came back to France to pursue his artistic luck outside his father’s country.

Naz was instrumental in getting the political message out in Manila, at a time when all street art was considered propaganda by the rightist/rebels. His work was contentious and much of his subject matter, he explained, was considered taboo. Naz speaks about “street art being unacceptable”: considered not only to be vandalism but to be a malicious mischief.  When he left the Philippines and came back to Europe to continue his career as a guerrilla street artist, he started placing his works on the walls of London and Paris to showcase the real political outcry of the Filipino people.

Having been active for 20 years, he was in September 2012 with cancer. Although under heavy therapy, he has continuously produced artworks, both walls and prints, and actively exhibited his works worldwide.