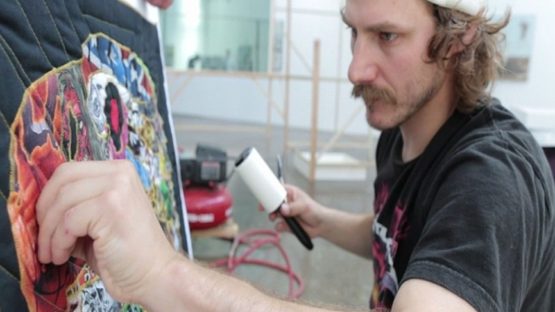 Ben Venom is San Francisco-based textile artist that primarily constructs quilts from recycled / donated material. His focus is on traditional craft, a seemingly almost extinct skill in today’s highly digitized world. He is  interested in juxtaposing traditional handmade crafts with extreme elements found on the fringes of society. His work can be described as opposing forces colliding at lightening speed. Imagery found in vintage tattoos, the occult, and motorcycle gangs are stitched together with recycled materials using techniques usually relegated to Grandmothers sewing circle.

Born 1978 in Charleston, S.C. Ben earned his BFA in Painting and Drawing at Georgia State University and an MFA from the San Francisco Art Institute. College taught him to be prepared and work hard all the time. Some of his favorite professors were Paul Kos, JD Beltran, and Pam Longobardi.

Venom’s unique artistic practice combines the traditional aesthetics of quilting with the robust graphics of heavy metal and punk bands. He cuts the graphics out of t-shirts from bands like the Misfits, Iron Maiden, AC/DC, Poison, and others, then weaves them into intricate patterns onto quilts. These patterns often form the shapes of mystic creatures like griffins or the double-headed eagle. Upon a deeper examination, though, Venom’s work contains amazing symmetry, with various graphics being placed thoughtfully throughout the form itself. He also gives nods to the brash music he grew up listening to by incorporating quotes and lyrics that only the most hardcore listeners could pick up on.

Inspiration for his works Ben finds by researching…books, films, and of course his peers. According to Venom he has been a heavy metal and punk rock fan for a long time. He grew up in the Atlanta punk rock scene of the ’90s so he had a lot of shirts lying around, primarily heavy metal shirts, and some of them were just so threadbare he couldn’t wear them anymore. So for his, then upcoming show in Berlin he thought what’s the next logical step up from a flag or a banner, and a quilt is what has came to his mind.

After he got bigger attention he has been able to reach out to more and more people within the scene. People have started donating shirts from bands they have played in so a lot of his shirts really come from the punk rock and metal community.

He had exhibited nationally and internationally over the past few years. He just returned from New York City where he had worked in “Cruel Summer” a group exhibition curated by Roger Gastman at Jonathan LeVine Gallery.

For Ben the work operates in three different worlds: the craft world, the fine art world, and the heavy metal and punk rock scene. When comes to what is more important for an artist talent or practice Ben was very clear: “Practice, Practice, Practice”.

Ben’s future plans are to travel to Seoul, South Korea in October to give an artist lecture at the National Folk Museum of Korea.