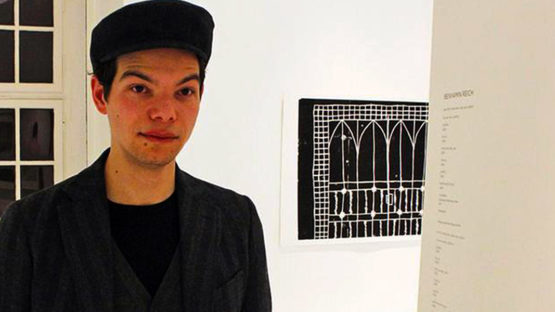 In the works of photographer Benyamin Reich, you will find the beauty and aesthetics which comes together with the tradition he was brought up in. His goal is to capture the Jewish orthodox man as a beautiful and sensual being, in contrast with the stereotype of the Jewish religious man as unattractive and unaesthetic.

Banyamin was born in a Hassidic family in Bney Brak in 1976. He was educated in the orthodox religious school system. At the age of 14 Benyamin moved to Yeshiva in U.S.A. From 2004 to 2006 he studied at the Bezalel Academy of Art and Design in Jerusalem and after finishing, he went to the Naggar School of Photography, Media and New Music at Musrara, Jerusalem. He returned to Israel with the intention of leaving religious learning and practice altogether. One year later after he was feeling drawn to the world of photography, thus he decided to go to Paris to study at the Ecole National Superieur des Beaux Artes.

In the exhibition Nostalgia, Benyamin builds bridges over the chasms separating an irretrievable past and European modernity. With the Holocaust, Orthodox Jewish life in Central Europe perished together with its austere world of ritual and mores. It was only when Jewish life began to flourish in Germany again in the 1990s that this most pious form of Judaism began to grow anew. Using two levels of representation, Reich brings together the pre-war past of German Jewry and its modern counterpart – on the one hand in photographs representing Orthodoxy today, whether in the guise of objects or persons, and on the other in the form of nature-based reflection.