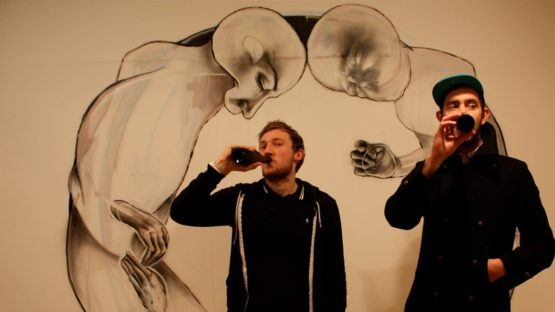 Best Ever is a British artistic duo by Hadley Newman and Neil Edward, both have graffiti backgrounds to flatter their skills in photorealism.

Neil started painting graffiti in 1997, taking the usual route of painting letter forms and later painting trains. He joined the 54 crew in 2003 alongside Piro, Jae, Zadok and Slam and they started to explore photorealism in their legal productions. “I had always been a real stickler for fine detail whenever I would draw or paint with brushes so it was something that came quite easy to me”, he says.
They are both from the same town and knew each other through the graffiti scene. Hadley liked Neil’s work and he felt their styles would work well together…

“Out of the blue, Hadley, who I had vaguely known through the south-coast graffiti scene, got in touch with me, suggesting that we work together. We met up for a pint and went through some of his sketchbooks and it instantly lit a fire under me. He was exploring ideas which felt very personal to me, and from the off, I could see the potential in us working together. We produced our first piece together on Halloween 2008.”
Newman and Edward both have backgrounds in graffiti but now they work on walls and canvases, creating their unique art that they describe as “anatomical mathematical realism” or “disturbed painterly realism.” Inspirations include “the uglier things in life – disease, death, symmetry, the exact size of everything, cycles, maths, science, mental disorders, the fragility of the human body, things too small to see.”

The harmony of photorealistic painting and the raw graffiti craft

Neil and Hadley quickly developed a strong reputation. Their photo-realistic walls are anatomically-based, but go beyond the pure form to convey emotion and turmoil. This British duo has the talent of combining photorealistic painting with the raw graffiti craft. When working together, Hadley would normally start by throwing some paint at the wall and begin to make lines and angles in a very loose style. From there on, they never know who is going to work on what part. It varies from piece to piece, in terms of who does the photorealism part, who does the loose sketch part. Some canvases have more input by Hadley and other parts have more input from Neil.

Best Ever’s work is anatomical and surgical way of looking at human figures. It’s mainly about death and disease. They like painting the things that you don’t see in a human; different angles, bones, blood and cells; even working out calculations that occur by just keeping a body alive.
Hadley Newman and Neil Edward both live in coastal resort town of Bournemouth in Dorset, England.