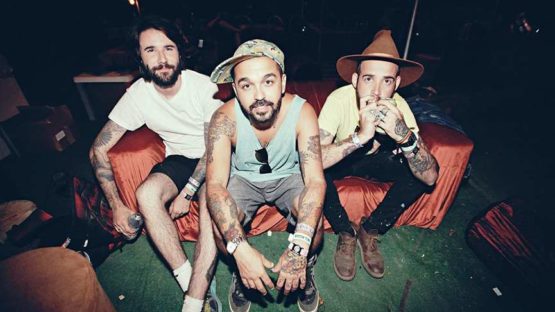 Bicicleta sem Freio (Bicycle Without Brakes) is Brazilian design and illustration collective who explores with sense of typography mastership the colors, the shapes and curves of a variety of girls, always with a dose of psychedelic and unique humor. Bicicleta sem Freio  have done projects for Sony, Nike, Absolut, Converse and were recently in the USA, where they were involved in actions of urban intervention and attended the Coachella Festival.

Douglas, Victor and Renato met for the first time at the Visual Arts course from the Federal University of Goias (UFG). The BSF came together as a big group of class colleagues that just wanted to have fun, create, draw and animate whatever came into their minds. With influences that go from Edward Mucha to James Jean most of the early work was posters for rock concerts and cultural events. In a way this experience would directly influence the birth of the band Black Drawing Chalks (of the three just Renato isn’t in the band).

Marck Al about this Brazilian trio says: “ Art, design and rock ’n’ roll. It might sound as a cliché but this is the simplest, most honest and coherent way of trying to explain this power trio of illustrators that answers to the name Bicicleta sem Freio. I wouldn’t be exaggerating to say that they live what they draw. Sometimes that doesn’t quite work, but most of the times the result is astounding and genius. The team effort has been raising awareness on all continents, the guys have been lending their unique touch to customers around the world, not bad for three boys riding a bike at full speed without any kind of breaks.”