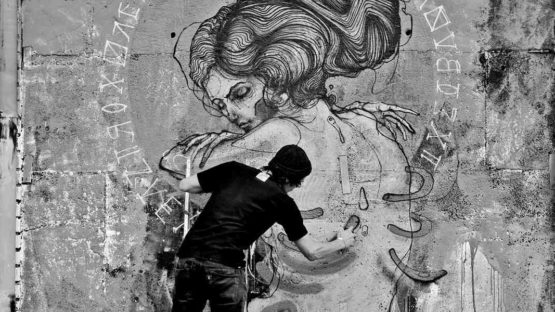 BLO is a French artist and a member of Da Mental Vaporz crew (DMV) who uses creativity as a device to question, invert or pervert aspects of daily life. There is a recognizable speed of the hand, looseness of line, as well as composition and materials (the frequent use of spray paint and ink marker) that directly draw from traditional graffiti. BLO is still actively working in urban settings, but is moving away from letter styles and illustrative characters. His current street work has become more figurative, drawing from religious imagery, sex, death, and classical painting. Within the exploration of this subject matter another parallel to graffiti is conceptualized–the assertion of power by actively defacing or reappropriating common images. This difference in context between the street and in the studio does not divide the work, but creates a visual dependency – a mutual relationship that ultimately strengthens both parts of his practice.

BLO’s involvement with graffiti stems back to his past in Lyon, France, where initially, his work was driven by not only the raw necessity to paint, but also to vandalize or in a sense, destroy.  Although rooted in traditional graffiti in both material and composition, BLO’s current practice displays an acute sense of awareness in moving from an urban landscape to gallery spaces–not just a shift in medium, but one of context, audience and exposure. What for many is a difficult space to negotiate, it is within this quiet rift that BLO’s paintings breathe.

In keeping with this classical context, BLO’s use of recognizable images and themes create a direct basis of familiarity with the audience. The body, specifically the sexualized female form, harks back to aspect of the “male gaze,” where the influence of Egon Schiele is seen in the use of truncated bodies, loose lines and sexual confrontation. It is also within this reconfiguration of the physical body where aspects of the surrealist sculptor/photographer Hans Bellmer can be seen by BLO’s embrace of tension via the use of physical abstraction and negative space. Other iconic references pervade the work such as religious imagery (especially the iconic Virgin Mary and the Christ Child), mememto mori, and occult symbolism.

Although working between the street and the studio can be problematic, BLO takes advantage of this gap by deftly playing with references and medium.