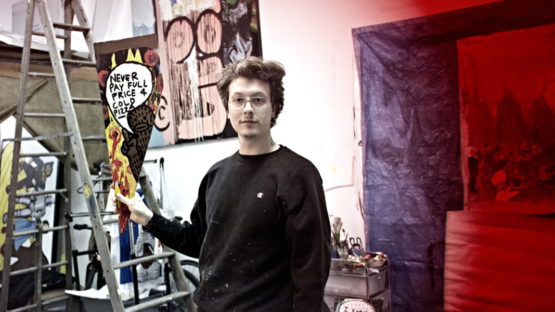 Brandon Sines is an American artist, born in Los Angeles in 1986. He grew up in Toronto, Canada, and to New York he moved in 2010. He is known for creating his iconic character, Frank Ape in the same year. Sines was fascinated by graffiti and art in the streets since he was four years old, as he says. When he was nine, he was visiting his family in the New York City with his mother, where he truly fell in love with the street art. As he says: “Seeing those colors on rooftops in the Bronx when I would drive by (with my mother) was always the highlight of that trip. I didn’t go to art school or anything like that. Anytime I took any kind of art class as a kid I usually felt like the lessons were pretty pointless and tried to forget them ASAP. I just had to trust my own instincts and just start creating.”

Sines had his first solo show in 2013 at the Living Gallery in New York. Dealing With Things Is Tricky is his second solo show and his most ambitious work to date. The main subject of this show will be his hairy, unkempt street denizen character (Frank Ape). New Yorkers may have met Frank wheat pasted, stickered or painted on the streets of the city that never sleeps, providing unsolicited culinary advice, or impersonating celebrities. Dealing With Things Is Tricky is a total immersion into the world of Frank Ape. Drawings, paintings, and mixed-media pieces tap into the American zeitgeist, taking inspiration from contemporary pop culture, celebrity, and iconic movie and music imagery. Sines also incorporates his street art techniques onto the old corner store surfaces, wheat pastes, stickers and paintings normally seen on the streets of New York City cover the walls. A throw back to the foods once sold at the corner store, Frank Ape brand drinks and canned items are on display. Entertaining animations of Frank are projected on the walls while epic 80’s tunes pump over the sound system. The whole show resonates with anyone who has grown up in the 80’s and 90’s while old school New Yorkers will pick up on the subtle nod to a previous, slightly coarser Alphabet City. About his created character Sines said: “To me Frank represents a blank slate—like a toy I can play with. As far as his name, Frank was literally the first name that popped into my head. I try not to second-guess myself too much…it’s not as organic that way. And of course Frank is such a common name—it’s like you’ve known him your whole life.” As he stated, his inspiration comes from: “People I meet, people I love, people I hate. Movies, music, pop culture, New York. Strong women, hood shit, cartoons, kids, toys, school supplies. Big butts and playing dress up.” When asked about his art, and what it means to him, he replied: “It means freedom. For me, on the surface it’s a way to stay balanced and happy, but beyond that it’s really getting to know yourself. Seeing how far you want to push it. Everyone has their thing that they do which is their thing. And I guess making art is my thing—that sounds kind of corny.”

Frank Ape art has been purchased by people all over the world, including Japan, Germany and Bangkok. Notable collectors also, like Solange, with 4 original Frank pieces, and photographer Robert Misrach who has several non-Frank pieces. Sines now lives and works in New York City.