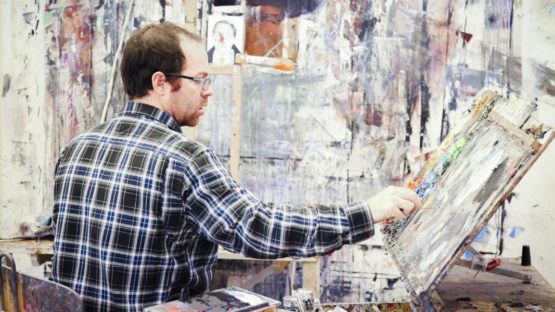 Brett Amory is an American artist, best known for his ongoing Waiting series of paintings in which he poetically depicts isolation caused by the big city life. Born in 1975 in Chesapeake, Virginia, he has lived in San Francisco for 15 years before relocating to Oakland in 2009, where he is currently based. In the past year, he has had solo shows in Los Angeles, San Francisco, London, New York and San Jose.

Amory began the Waiting series in 2001 with paintings depicting commuter subjects seemingly detached from their fellow passengers and surrounding environments, inspired by the introverted culture of public transit and inhabitants of the Tenderloin neighborhood of San Francisco (where the artist lived for fifteen years).

Figures and places in Amory’s work are based on photographs the artist has taken of ordinary city architecture and random people who he sees on a daily basis but never speaks to. Brett feels especially drawn to individuals who look lost, lonely or awkward – those who don’t appear to fit in socially. As the title suggests, the Waiting series is about how we rarely experience living in the now, always awaiting what will come next or obsessed with what has already transpired.

In our age of distraction, being in the present is difficult to achieve outside of meditation practice, it requires heightened cognitive awareness and clear mental space, often prevented by constant internal dialogue, preoccupation with memories of the past and/or concern for the future. Amory’s work attempts to visually represent this concept of disconnection and anticipation, conveying the idea of transient temporality that exists in most moments of our daily lives.