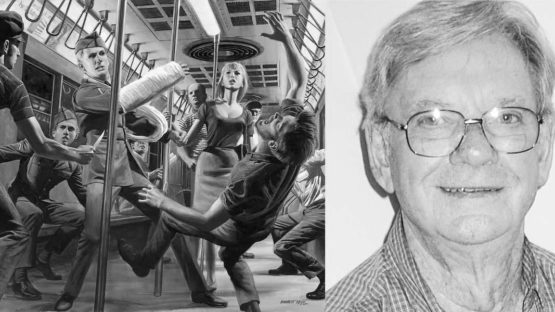 Bruce Minney was an American artist, considered as one of the top illustration artists who worked for the post-war men’s pulp adventure magazines published in the 50s, 60s and 70s.

Bruce was born in 1928 in Oakland, California. As a child, Minney loved to draw and after graduating from Oakland High in 1946, he was accepted by the California School of Arts and Crafts. After graduation, he married his high school sweetheart, Doris Schulz, and soon their daughter was born. To support his young family, Bruce got a job with United Airlines as a baggage handler. Determined to persuade his artistic career, he worked on samples for his portfolio at night. After an unsuccessful trip to New York looking for illustration work, Bruce quit the airline and got a job as a fireman in Orinda. Eventually, he hooked up with Eddie Balcourt, a well-known artist’s representative, and began his career as a professional illustrator.

Bruce has worked in a variety of media, producing Silver Age vintage paperbacks, pulp magazine and commercial illustrations. Because of the diversity of his commercial and published work, he was often called ‘the man who could paint everything’. His garish full color covers and lush black and white and duotone interior illustrations depict Westerns, exotic locales, military and aviation art or gangsters and sexpots. Minney did many credited and uncredited illustrations for Stag, For Men Only, Male, True Action, Man’s World and many others published by Magazine Management. Despite the diversity of the subjects he was adept at, Minney is often associated with the so-called Men’s Sweats, the short-lived magazine genre that filled the void for racy entertainment after the demise of the classic pulp era, but before the onslaught of modern-era men’s magazines like Playboy, Penthouse and their low-budget imitators.

As the 60s wore on and US involvement in Vietnam increased and magazines like Penthouse became more explicit, circulations for the men’s adventure magazines dropped, and many of the golden and silver age illustrators who found themselves largely out of work. The publishing industry evolved as paperbacks embraced photographic or graphic designed all-typography covers, and magazines turned their back on illustration altogether. Minney abandoned the field in the 70s. One of the last men’s adventure magazine illustration Bruce did was for National Lampoon in 1970. This illustration is a brutal, acerbic parody in the men’s adventure style set in Vietnam.

Abandoning the field of illustration, Bruce become involved in the advertising industry, working as a freelancer. Eventually, the brutal pace of advertising work convinced Bruce that it was time for a change. He had always been interested in sculpture, and he took some pottery classes mainly to have access to a kiln and started to develop a style. In the 90s and into the 2000s, Minney worked in ceramics and exhibited his works at many arts and crafts shows in California and Florida winning numerous awards. His most recent work included collages and paintings.

Minney passed away in the summer of 2013.