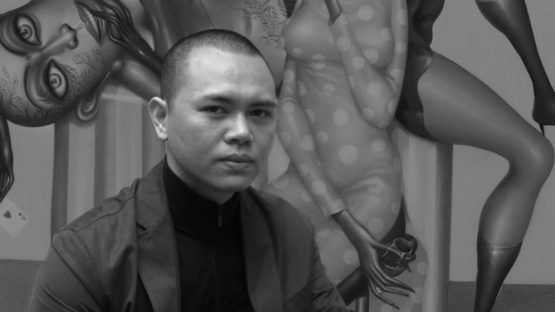 Bui Thanh Tam is a Vietnamese artist, best known for his exploration of Vietnamese contemporary society from different angles. In his works, Bui Thanh Tam has chosen to use parody and humor to convey the emotion towards a newly emerging modern Vietnam that is quickly adopting capitalism. Born in Thai Binh, Vietnam in 1979, Tam graduated from Vietnam Fine Arts University, Hanoi, Vietnam in 2009.

Tam Bui Thanh has made his presence felt over the past years by his works that are like manifesto about his criticism of the changes in the Vietnamese society. With his collection Crazy People, Tam explores the effects of the hyper materialism being embraced by his compatriots. He believes this younger generation is changing for the worst, being obsessed with luxury brands and social status. The artist is therefore portraying his contemporaries as Vietnam’s ‘nouveaux-riches’ as they have enthusiastically taken on Western culture. The women in his paintings often serve as symbols and may be viewed as having non-traditional Vietnamese values.

His subjects possess the stylized faces of Vietnamese water puppets and portrays them with simpleton smiles and wide gentle stares. Their silly faces serve as masks behind which they hide their feelings of confusion and inadequacy. Consequently, Bui Thanh Tam can be linked with the cynical realism movement along with Yue Minjun.
The artist states that ‘this series of paintings was created when Vietnam is in a transitional stage. The halfhearted communist regime is on its path to change and integrate into the wider world. This sudden change without orientation makes the human psyche overwhelmed, confused and disoriented. The result is that society often develops conflicts between parts of the Vietnamese culture that are Eastern and parts that have Western influence.’

Other works by Bui Thanh Tam

Other noticeable works of Bui Thanh Tam include his Young Vietnamese Girls series – a portrait series owing to their captivating and characteristic faces, against a duality of strong colors in the background. In each portrait, traditional images of children are pasted onto these Vietnamese girls’ faces, adding an element of sensibility and intimacy between the viewer and the portrait. The colorful background and the images pasted onto their faces, represented almost like a memory, enables the viewer to imagine endless background stories of the girl or woman.

Bui Thanh Tam has taken part in international exhibitions in Hong Kong, Netherlands, Malaysia, and China as well as in Vietnam and Thailand. He has had many group exhibitions in Hanoi and Ho Chi Minh, and two solo exhibitions including Asia Contemporary Art Show (ACAS) and the Affordable Art Fair in Hong Kong.