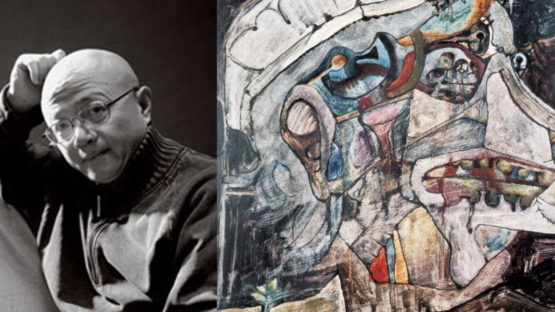 Cao Li is a Chinese contemporary artist whose paintings, like poetry, are combinations of imagination and reality . Sometimes he feels as if he lives in a dream world that he inhabits in his waking hours, his paintings being a reflection of that world. Consistent themes in Cao Li’s paintings are the horse, birds, musicians, and the nude figure; the horse because he was born in the Year of the Horse, birds because they represent absolute freedom, musicians because he has been one since childhood, and the nude figure because to him it represents the dream state. “Horses, A Series, #7” emphasizes the angularity of the horses bodies while drawing upon a unique Chinese device practiced in traditional brush painting that allows the viewer to see the subject from a multi-level perspective. The fluidity of the brush strokes adds yet another reference to traditional ‘guohua’ (brush) painting.

Cao Li was born in 1954 in Guizhou, Guiyang province where he attended primary and middle school and was recognized as a child prodigy. He is a multi-talented artist and musician. In the early 1970s, he began a private study of oil painting, although he was assigned an official Cultural Revolution era job as a steel beam construction worker. In 1978, at the encouragement of friends, he entered the Central Academy of Fine Arts, Beijing, graduated from its Mural Painting Department in 1982 and became a teaching assistant there. In 1988, he held his first one-man exhibition at the Central Academy and continued to work at the school in the capacity of lecturer. He took a one year sabbatical in 1991 to study privately in Europe, traveling in France and Spain. When he returned in 1992, he became an associate professor in the Mural Painting Department and is today head of the department. He has had six monographs published on his work and numerous exhibitions of his paintings have been presented throughout Asia and Europe.