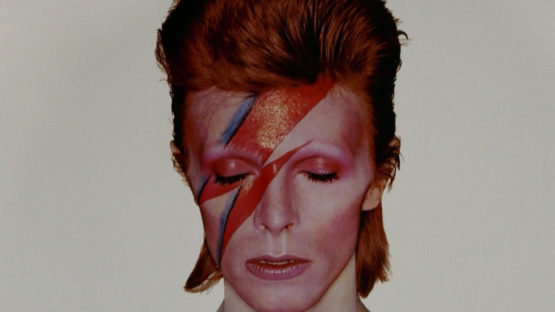 Every once in a while comes a moment of pure inspiration, the endless creativity that will leave an impact on the entire world. One of those magical moments occurred in 1973, when Celia Philo, a graphic designer, worked together with a famous photographer Brian Duffy, creating, in the end, something that will remain written in the history of both art and music. That was the birth of the omnipresent cover for David Bowie’s Aladdin Sane, an album that skyrocketed Bowie to the No. 1 in the United Kingdom and eventually made its place on the prestigious Rolling Stone list of 500 Greatest Albums of All Time (2012), sitting strongly at position #279. After its release in 1973, the cover had a powerful influence on the establishment and fast spread of the glam and punk rock fashion that completely took over London. In charge of directing the shoot for the cover design, Philo had a major role in the creation of one of the most famous and iconic album images of all times.

A Life of the Flash

Already (relatively) known prior to the Aladdin Sane, Bowie had amassed his followers. However, it was this particular album that put him on the main stage, and the flash sign over his face that has played its part in creating a specific image that Bowie retained until his premature death in early 2016. Celia Philo studied graphic design at Maidstone College of Art in the 1960’s, the same time David Hockney was also there teaching fine art. After studies, she returned to London, where she married and did a lot of various design commissions throughout her 20’s. She also worked for Pirelli calendars, and that turned out to be a key thing in her relationship with Brian Duffy. Introduced to the photographer by someone who had known that the both of them had worked o Pirelli’s projects, Philo quickly realized that they could work together. The feeling was mutual, and Duffy asked her if she’d be interested in joining his in setting up Duffy Design Concepts, a small company that consisted of only the two of them and an assistant. For Bowie’s cover image, the duo was joined by Pierre La Roche, a French make-up artist chosen by the Duffy himself for the shoot. The exact origin of the Flash is still engulfed in mystery, and there are still a lot of theories about how it came to be. However, Philo was finally able to shed a little light on the topic, stating that it was a fruit of their work as a team. They knew that Bowie had already worn costumes with a lightning flash on them, and Pierre said that it would be a good idea if they put the flash over the musician’s face. Philo agreed, Dufy took the pictures, and the rest is a part of history.