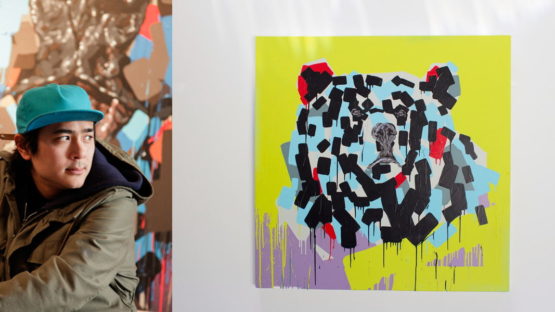 Born and raised in Honolulu, Hawaii and enthralled with graffiti and the art of the Mission School, Chad Hasegawa moved to San Francisco in 2000. He received a BFA in advertising from the Academy of Art University and worked for top agencies, including Venables Bell & Partners and Goodby Silverstein & Partners.

After leaving advertising, Chad concentrated on creating murals on the streets, and painting canvases for both commercial and non-profit gallery exhibitions.  Hasegawa quickly gained recognition for his bold and colorful latex paint brush strokes that pushed the boundaries of public art.

Participating in and having been influence by the graffiti community taught Chad to be resourceful with paint and supplies. His self-taught use of color aggressively shapes an object so that it is clearly visible when viewed from a far. Up close, the work can be viewed as an elaborate color design—an almost mosaic pointillism of brick-like shapes.

According to Chad to their reputation of being fiercely protective of their young, bears are highly respected in many cultures and are considered to be ancestral spirits. Each of Chad’s bear paintings is created with the intent of being a protector; personally for himself and for everyone that may come across his work.