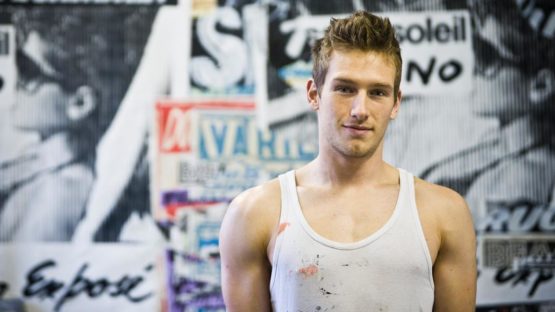 Charlie Anderson is a Scottish artist, known for his epic scale paintings composed of layered fragments from advertisements, postcards, posters, newspapers, street flyers and magazines. The post-punk effect achieved through this intensive process of layering stencils and paint results in a vibrantly textured and visually stimulating portrait of contemporary culture.

Anderson was born in New Zealand, grew up and lived around the world; in Taiwan, America, the Solomon Islands, England, France and Scotland; where he lived for 10 years and graduated from Edinburgh College of Art in 2009. After Scotland, Anderson settled down in London because that city, according to him, has a great audience, it’s a world capital for art.

When he left school, he had a completed portfolio of painting for art class. The last thing Charlie Anderson wanted to do was to paint. In his first year at college his painting tutor told him he will never get into the painting course in second year in Scotland’s ECA:
“That was fine by me until I didn’t get into the illustration course, the animation course or the sculpture course. After a meeting with the head of year I managed to talk my way onto the painting course which had a few spaces left. I failed painting in second year and had to reset, scraped through third year and then in fourth year it clicked”.
That was the time when he realized that art was his calling – it was halfway through his fourth and final year at Art College.
Charlie Anderson admits that he really admires Mark Bradford mainly for his attitude towards making work, which is very inspirational. He also loves Sigmar Polke’s work, the way he painted life and his personality within the paintings. Ross Bleckner is another artist Charlie Anderson is looking at a lot recently.

The Layers of Fragments

The ideas are developing in his head constantly, he claims, then the process involves painting one layer at a time, and then painting over sections of it with new layers, then painting over that until the painting is finished. He is using a bunch of hair dryers to dry the paint, so once one layer is dry he can immediately paint on top of it without the paint blending. It’s spontaneous and each painting tends to resolve itself, so sometimes that happens soon into a painting and sometimes it’s a period of weeks, Anderson says. He often repeats images in his paintings because he likes to explore parallels between art and entertainment, and the changing role of art in society. He is also drawn to the throwaway nature of life:
“Things seem to change and develop very quickly, it’s hard to put my finger on it but I like to celebrate the remnants of discarded values, things I’ve come across that were once important enough to exist in the first place but are now just used up”.

As for the relationship between art and advertising, Charlie Anderson says:
“I love a good bit of advertising. Advertising and art are both to do with communication. As a painter I draw a lot of influence from traditional advertising methods, sign painting, using text and image etc. When I look at something I look at it in its context, I love public art that uses the space it’s in specifically or communicates something that relates to the context in which it is viewed. A lot of the art I see is online because it’s physically inaccessible, so simply I’m making it possible to experience my work if you can’t see it in real life. Usually a series of paintings are the culmination of an idea, and their lifespan as a series tends to last the length of an exhibition so it’s important to document them how they were intended to be viewed”.

In 2013, Anderson did an installation in the new Dr Martens store on Princes Street in Edinburgh for their current campaign at the time ‘Stand for Something’. It was an ongoing motive to explore new ideas and ways to communicate those ideas, he says.
Charlie Anderson is constantly undergoing new experiences and that affects his view of the world and of himself, something which he channels into the paintings he makes, he said. For this Dr Martens project, he designed a series of Edinburgh based posters encompassing the punk/alternative spirit of Dr Martens, whilst documenting some of the history. Charlie Anderson painted these with acrylic and spray paint onto one huge sheet of paper then pasted it onto some boards in the store.
That same year Anderson was asked to give famous Gordon Ramsay’s lift a makeover for his Bread Street restaurant in London. He then hand painted 10 square meters of wallpaper lining then pasted it onto the lift walls.

Among his notable collaborations are the one with Ringo Starr in 2012. Anderson painted a knotted gun sculpture with a surface design by Starr in commemoration of John Lennon’s death. He was working on a different project in London when a PR officer from the Non Violence Foundation spotted his work and asked him to join the appeal for a worldwide end to gun crime, which features a few meter-high statues showing a gun with its barrel tied in a knot.
Starr was brought in because of his association with band friend John Lennon, who was shot dead 31 years ago this week – and Charlie was enlisted to work with him. Anderson has also met and worked with boxers Amir Khan and Ricky Hatton on the project, adding that he was pleasantly surprised by their artistic talents.

The other collaboration includes Coach and Mr. Porter. The Mr. Porter collaboration was something he was invited to do for their first birthday celebration, using images of their idols that he turned into stencils and sprayed on canvas. The Coach collaboration was part of their ‘New York Stories’ series, where they invited people with some connection to New York City to film what they do and tell their story.
The work of Charlie Anderson is included in several international collections, including British Airways. His exhibitions took place in Edinburgh, London, Berlin, Lugano, Los Angeles… He has been awarded the British Airways Travel Prize (2009), the Meyer Oppenheim Prize by the Royal Scottish Academy (2010) and shortlisted together with 30 other UK artists for the Jerwood Contemporary Painters (2010).