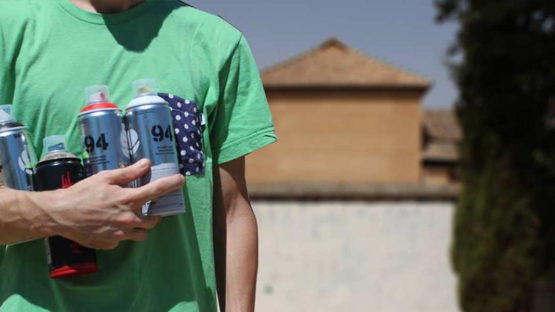 Cheko is a Spanish artist known for his graffiti gifs commonly known as “giffiti”. His works are influenced by urban culture, skateboarding, bicycling and people who love that culture like breakers, musicians…He was born in 1986 in Córdoba, Spain and earned his degree in Fine Arts and a master degree in visual arts from university of Granada and Bologna.

His moniker “Cheko” he got from his friends when he was 16, and it doesn’t have special meaning only as his identity in the world of graffiti.

His first graffiti was a wild style piece that he painted when he was 16 in Córdoba: “At that time we bought a spray can among all, and after skating we were going to paint the city. I have always felt the need to express myself in the streets, the sun, night, cold, wind, heat, risk… all  things that make you feel free.”

When starting a piece Cheko always makes a sketch, he has many sketchbooks and sometimes, according to him, the first drawing is better and fresh than the final piece. The process of making graffiti gif is simple, artist explains: “You have to do a sketch and the paint it on a wall. There are only two differences, first you have to do a drawing of each frame of the animation, second each frame is a different graffiti and you need to make a photo of the piece and then erase it for paint the next frame. So I paint, photograph and erase each graffiti many times, then I put the pics on Photoshop to make the gif.”

Cheko finds the inspiration for his works in the streets, walking about the cities where he sees amazing people who use the space differently of the rest, and gorgeous objects like old cars, bicycles… Animals inspire him a lot too,” They are like our trip partners and we can learn a lot from them, like my dog Lola. She always comes with me when I am searching the next wall to paint.”

His work has evolved through the years in color palette and detail but the themes are the same.

According to Cheko, the role of an artist in the world must be the same of all people: “You have to work really hard to have fun with your work and express your thoughts and ideals and use creativity to make the world a better place, you must also use your power and energy to fight the system when necessary.”

His future plans are to take a tour for different cities, to get know new places and people and to make graffiti and graffiti gifs based on those experiences.