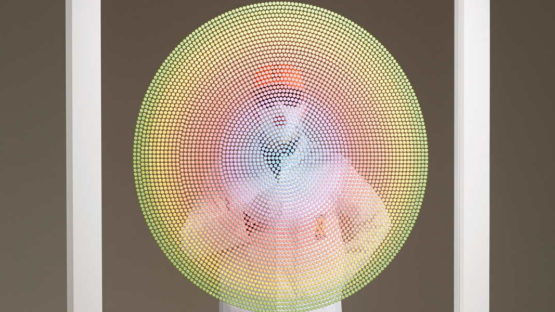 Chemical X is a British artist whose work is based in the world of the pixel and the human brain’s ability to fill in what it wants to see, in order to add detail that never existed. The proximity of the viewer to the subject can mean that one studies the detail at the expenses of the bigger picture or, from a more distant perspective, one is forced by one’s own subconscious to bring order to the seemingly chaotic mix thousands of pills, each charged with their own power to polarize opinion.

Artist Chemical X is not a newcomer to the art world. Working for more than two decades, the artist did some amazing design projects in the early 90s (the most famous one is undoubtedly the logo he did for Ministry of Sound), but he also collaborated with some impressive names like Banksy, Damien Hirst and Jamie Hewlett.

In September 2014 Chemical X contributed to the Bear Cub Gallery ‘Ark’ Project in London. The work, ‘The Prophets of Ecstasy” is a pair of windows entitled ‘The Rapture‘ & ‘The Reckoning‘. For this project he has taken 10,000 ecstasy tablets to make two enormous murals. They were withdrawn before the end of the show due to an imminent visit by the Metropolitan Police.

For this work, the artist and his team make a purchase in the “ingredients” wholesale and then make the pills in a house at a secret location. They use two pill presses, one to get the colors right in blanks, than they transfer the colour recipe over to the other press hidden away so that if the studio is raided there is no “contamination”. They have a large selection of old school embossing tools.

Actually, this is not the first time Chemical X has used the illegal substances to make art. His first exhibition was halted by the gallery at the last minute due to legal concerns.

Chemical X lives and creates somewhere in the United Kingdom.