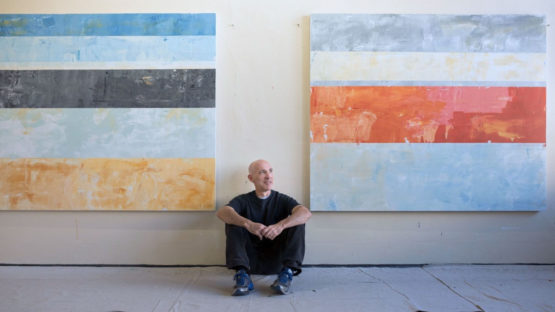 Clay Johnson is an American abstract painter whose reductivist compositions explore the relationships between color, form, and texture. Johnson earned his B.A. in studio art and art history from Duke University in 1985. Afterwards, he worked as studio manager for the painter Robert Natkin. Says Johnson, Most of what I know about painting I learned from Bob.

Johnson has said he does not believe in inspiration. Instead, he believes in evolution. He is motivated by process. Rather than being planned ahead of time, the work emerges through a series of critical responses to previous decisions. He begins each painting by taping off one or more horizon lines. His initial color choice then guides the composition forward. Certain elements—a color, a line, a texture—are destroyed, while other elements incite unimagined… His intuition is guided by visceral reactions to the physical qualities of paint, the quest for pictorial balance, and the emergence of abstract relationships. The most important part of this process is editing. As Johnson says,

that narrative—the story of the painting’s own making—becomes the central subject. It’s this process of trial and error— the flawed execution of a perfect concept—that can make a few lines and rectangles so compelling.

Layers of translucent acrylics build up a surface reminiscent of vintage and peeling paint…the colors are in sharply defined rows which bleed into each other without blurring the lines. The viewer may see horizon lines, or landscapes, or fields of color in harmony, or perhaps the sense of layers of dreams barely visible.

Johnson has exhibited in numerous group and solo exhibitions throughout the United States. His work is in the collections of the Kimpton Corporation and the University of Wyoming Art Museum, among others.

He lives and works in Laramie, Wyoming.