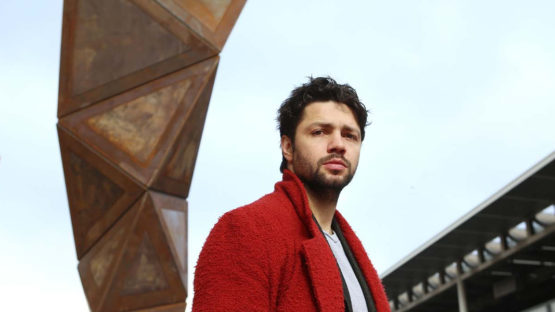 Imbued with an appearance of scientific rationality, Conrad Shawcross’ sculptures explore subjects that lie on the borders of geometry and philosophy, physics and metaphysics. Inspired by different technologies, the artist’s structures may retain in appearance the authority of machines – yet, they remain enigmatic, filled with paradox and wonder. Some have an absurdist melancholy feel, while others tend to the sublime, substituting the purely functional for phenomenological experience. In the end, Shawcross’s art questions what we take for granted and encourages us to see beyond the physical.
Throughout his career, Shawcross has experimented with ideal geometries and topologies; these constructions are conceived as systems, sometimes modular, sometimes mechanical, which could be theoretically extended infinitely into space. In these and other sculptures, Shawcross has paid tribute to some of the great pioneers and analysts, and considered specific moments or figures from the past. Paradigm (Ode to the Difference Engine), 2006 references the life of Charles Babbage; Space Trumpet, 2007 is inspired by the history of early acoustic mapping; while Slow Arc Inside a Cube, 2008 takes its inspiration from the scientist Dorothy Hodgkin’s discovery of the structure of pig insulin.

More recently, Shawcross has developed the scale of his practice, taking on architectural and public space with work that combines epic scope and poetic grace. Timepiece, 2013, a major commission originally conceived for the Roundhouse in London, saw the artist transform the iconic main space of this historic London building into a vast timekeeping device activated by sculptural and light elements, as well as the shadow presence of each visitor to the space.

A further evolution of Shawcross’ practice has seen the development of static works that contain both an internal dynamic and an idea movement. Three Perpetual Chords, 2015, a series of knot-like sculptures commissioned for Dulwich Park, draws from the artist’s ongoing study of harmonic ratios. The Dappled Light of the Sun, 2015, first installed in the Annenberg Courtyard of the Royal Academy of Arts, London, is an immersive work comprising five branching cloud-like forms made up of thousands of tetrahedrons. Part of Shawcross’ ongoing explorations of the four-sided tetrahedron as a tessellating form Paradigm, 2016, a permanent installation at the Francis Crick Institute’s biomedical research centre in King’s Cross, is currently the tallest public sculpture in central London.

Unveiled in Autumn 2016, The Optic Cloak, a major architectural intervention for the Greenwich Peninsula low carbon Energy Centre, is a synthesis of engineering and optical research that draws on subjects including maritime camouflage, Cubism and Op Art. Made from lightweight aluminium perforated panels whose overlays create an optical effect, the structure is both monumental and visually dynamic, utilitarian and beguiling, created in sympathy with the design and ethos of the Energy Centre while appearing continually to change in different lighting conditions and as viewers move around it.

Shawcross was born in 1977 in London, where he currently lives and works. The artist has undertaken numerous residencies, awards and commissions: in 2016 to mark the inauguration of The Francis Crick Institute in King’s Cross, Shawcross created a permanent public sculpture ‘Paradigm’, located at the entrance of the institute; in 2015 a new series of permanent sculpture was unveiled in Dulwich Park following a commission by Southwark Council advised by the Contemporary Art Society to replace works by Barbara Hepworth that were stolen in 2011, and the monumental site-specific installation The Dappled Light of the Sun was displayed in the Royal Academy’s Annenberg Courtyard as part of the Summer Exhibition 2015. The Ada Project, an ongoing series of musical commissions between Shawcross and leading contemporary composers, was conceived for the Palais de Tokyo, Paris (2013) and has since travelled to venues in Tasmania, London and Hong Kong. Shawcross was one of three contemporary artists invited to create works inspired by Titian’s masterpieces for the project Metamorphosis: Titian 2012, an ambitious collaboration with the National Gallery and Royal Ballet for the Cultural Olympiad. He was Artist in Residence at the Science Museum, London, from 2009 – 2011, and his first public realm commission Space Trumpet, installed in the atrium of the refurbished Unilever Building in London in 2007, won the Art & Work 2008 Award for a Work of Art Commissioned for a Specific Site in a Working Environment. In 2009 he was awarded the Illy prize for best solo presentation at Art Brussels.