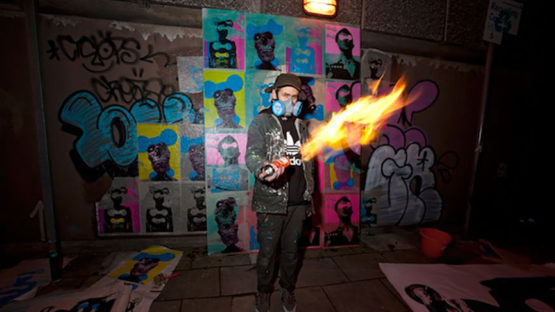 Widewalls
facebooktwitter
Born in 1980, Cyclops pursued an early interest in graffiti, and found himself expelled from school for it. After becoming involved in Manchester’s early house music scene, he drifted into an underworld life culminating in a period of addiction. Funding his way via a talent for forgery, it was ten years before he returned to art after periods of
jail and homelessness. With a new appetite for creativity, he quickly became involved in the burgeoning street art scene in London, forming the noted Burning Candy crew, including Tek 33, Sweet Toof and Rowdy.
Cyclops work was shown at Tate Modern gallery as part of its 2008 exhibition Art on the Street. Invited by Banksy to appear in Exit Through the Gift Shop, he was arrested during filming. The resulting footage was included in the documentary’s final cut. After a series of shows and painting around the world he enrolled in the hugely respected Royal
College of Art, being accepted without any prior training or eduction. He completed a three year masters’ degree. He works from his studio in London.