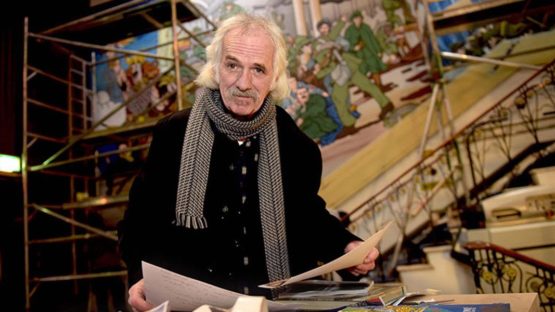 Danny Devenny is an Irish artist, famous for his murals that have strong political connotations. This self-thought painter understood what his role in the society was, so he began to make protest art posters while he was still in jail during the 1980’s. Much of his works are used as propaganda, but after some time the messages he wants to send have changed. As a former Republican Army member, he used murals and other tools in order to speak about the resistance to the British and unionist state. This approach used together with Marty Lyons helped to give voice and create the identity of the community they lived in.

Since he was 15 years old, the artist started volunteering for the IRA, and in 1973 he got locked down for robbing a bank, during this action he got shot three times. Here he embarked his artistic career, by making illustrations for the Republican News, which were smuggled out and published. After being released in 1976, he worked as a political activist for Sinn Féin magazine, but in 1978 the whole editorial team was arrested, thus shutting down the office. Nine months later he was out again, and it was then that he decided to make murals, as a protest for conditions that were applied to political prisoners. The author moved to Dublin where he got shot again. His first work was called International Wall, located between Protestant and Catholic areas in Belfast.

The author moved to Dublin where he got shot again

The Imagery on Walls

The events that marked Ireland’s recent history like street battles have been shown on the walls of cities. The images of the Easter Uprising, the Hunger Strike, and other military scenes used by the muralists were not meant to provoke more violence, but rather to be a vehicle that awakens the support for the cause. The division that characterizes not only communities but also art, could be seen in different territories, depending on the majority who lived there. These ‘borders’ defined by murals, today are known as Peace Lines, multiplied during the years, and now represent a tourist attraction.

The division that characterizes not only communities but also art, could be seen in different territories

The Transformation in The Cause and Use

Since the Good Friday accord from 1998, the painter has been committed to the peace process. The subject of his art now includes other conflicts in the world like the ones in Palestine, Iraq, Guantánamo, but also draws attention to other themes of social issues, such as injustice and unemployment. Together with Mark Ervine, the son of a prominent Loyalist leader, the author painted a mural of Picasso’s Guernica, including other projects that promote peace and tolerance between the divided communities. They have also been invited to make series of Beatles murals in Liverpool for the European Capital of Culture celebrations. The artist also makes paintings against racism.

He lives in Belfast, Northern Ireland.