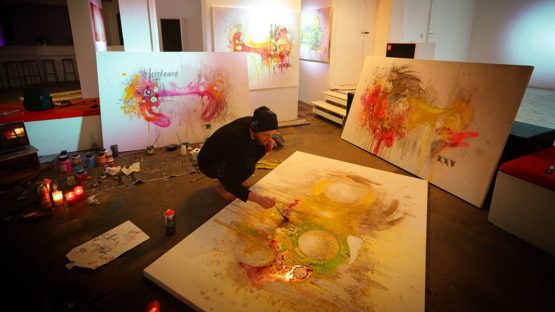 Danny Doom aka Desur aka Kid Doom is a German contemporary artist who began his artistic development in the graffiti scene and took from there the way to a style appears as diverse as the materials he uses.

His paintings are composed of illustrative and abstract elements, which he put together with paint, spray paint or ink to complex arrangements. Some of his materials, such as dirt or coffee, are to provide the ground of his pictures the impression of a naturally aged wall and give them a random appearance. So the artist is partly from the influence on the resulting image and gets involved in the fire their imagination chance. In many details of his imagery he plays with hidden messages, riddles and ambiguity.

Over the years Danny Doom took part in art projects of all sizes, from small paintings to several hundred square meters of graffiti murals and was collaborating with numerous of artist, including Daim, Os Gemeos, Loomit, Seak, Banksy, Toast, and Alex One, among others. He was included in many exhibitions in Europe, Australia, New Zealand and USA.

Amongst others prizes, Danny Doom received the reddot Award, the If Communication Award and was twice New York festival finalist.