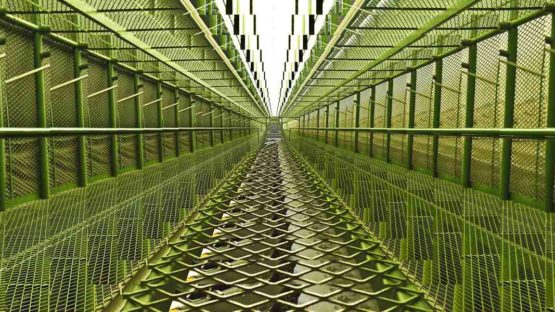 Deborah Engel is a Brazilian artist know for her complex illusionist artworks that explore the transitory nature of both space and time. Her works are often composed of series of photographs skillfully arranged into collages that can be labeled as a type of photograph-sculptures. Similar to the finest Op art masters, Deborah Engel’s works create the illusion of a three-dimensional space when seen from different viewing angles. By shifting and changing its form from various perspectives the artworks provide the viewer with an active role in the creation of an actual art piece.

Photograph-Sculptures – a Specialties of Deborah Engel

Deborah Engel was born in Sao Paolo in Brazil in 1977. She started her career by working as a studio assistant in 1996 before studying at School of Visual Arts of Parque Lage in Jardim Botânico. Her work is strongly influenced by kinetic art, Russian Constructivism and Rio Neoconcretism, but also by other sources including music, cinema, literature, and nature. Her multilayered collages appear as if they are subsequently shifting from the state of increasing and decreasing in volume while the audience moves around to view the artwork from every possible angle.

An Homage to Rio de Janeiro

The artist’s Loco in Loco, series of works was dedicated to her hometown of Rio de Janeiro and its rich history. The series explored the famous architectural landmarks like Parque Lage and Museu de Arte Moderna. Composed of photographic works, video and physical installations the series dealt with the gap between what we look at and what we see. Loco in Loco focuses on the development of architecture and their subject. As the viewer moves following the rhythm of the colleges, a whole new dimension opens up. Guided through the maze-like imagery by the power of intuition the viewer discovers new sides of the portrayed space that until then remained out of his grasp. In her Possible Landscapes series, the artist appropriated magazine covers and photographed them in different surroundings to achieve a multitude of meanings. By placing an image in the center of another photographic framework the artist explored the limits of photography as a medium and its use in the creation of complex visual narratives.

In the Viewer’s Eye…

In 2010 Deborah Engel published a book entitled OLHONOLHO that gathered some of her finest works thus further extending the artist’s artistic explorations. The project began in 2005 when Deborah Engel sent a sticker with a photograph of her own eye to her fellow artists around the globe. They placed and pinned the eye on various locations and photographed it before sending it back to the artist. An array of these images were composed into the 2010 publication that explores the way different people view and comprehend the exactly same message. Her artworks were on view at numerous group and solo shows in Brazil and abroad and will continue to tour the world in 2017 as well.

The artist is represented by Create Gallery Hub.