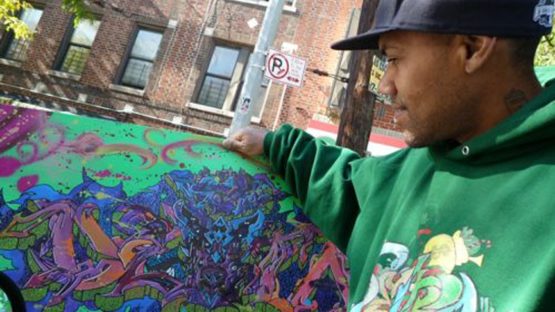 DELTA 2 (b. 1965) was raised in the Spanish Harlem section of Manhattan and became involved in subway painting in the late 1970s. His early observations of IRT Kings such as LEE and BLADE drove him to create his own style. DELTA’s subway painting career peaked from the early to mid-1980s. He became well known for his rapid takeovers of the 6 and 4 lines. During this time period DELTA also founded the crew Kings Arrive.

During his career he teamed up with writers such as MACK, SWAN, JOEY TDS, SHARP, PART ONE and others.

DELTA 2 also experienced success in the international art scene. Beginning in 1984 he painted in more conventional contexts. He participated in a Guillaume Gallozo graffiti art presentation for Valentino’s 25th Anniversary in Rome, Italy and displayed and sold paintings throughout Europe.