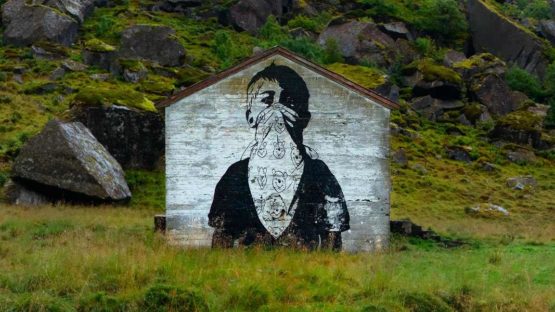 Dolk Lundgren is the most famous Norwegian stencil and graffiti artist, whose artwork is motivated by pop culture. He is better known as just Dolk, his pseudonym, which means dagger or knife when translated into English. The talent and respect this man has, is best described by his mates from vandal school, who voted Dolk as ‘most likely to succeed’. Sexual motives are the usual ingredient of Lundgren’s art, which he skillfully includes into a humorous and critical context. The artist gives an advantage to black and white style, because of its impact, and speed needed to finish a piece. The idea of his artwork is to send the message of love, hate, and dreams, basically whatever he feels in the moment.

Dolk was born in Oslo, the capital of Norway in 1979, but he grew up in Bergen. Before discovering stencils art, he studied graphic design in Melbourne. It was in 2003 when he met street art for the first time, after being inspired by the world’s most famous street artist, Banksy. At the beginning of his career, people thought that Dolk is actually the pseudonym for the Bristol-based stencils artist, but he soon proved them wrong and became the masters of his own right. A huge gratitude the artist owes to Wooster Collective and Pictures on Wall (POW), who helped him introduce his work with masses. Dolk describes his hobbies as sex, sex, and vandalism, and continuous by adding paintings, stencils and exploring as his interests. His goal is to travel and be able to live by selling his artwork. The reason the artist has chosen stencil art, rather than graffiti, is because of it raw and dirty look, and because the latter one belongs to the underground, hereof it is harder to interpret to ordinary people. Dolk’s stencils are appealing to a larger crowd, where both elders and children laugh at his work and understand the message he wants to send.

Dolk describes his hobbies as sex, sex, and vandalism, and continuous by adding paintings, stencils and exploring as his interests

From Walls of Bergen to Walls of Galerries

In 2006 Dolk makes a decision to swap the street for gallery walls, and end his underground style of doing illegal works. His remarkable early print releases like Puppy Love, Che, and Burger King, enabled him to participate at Santa’s Ghetto’ festival in London. Che– featuring a cigar-smoking Che Guevara proudly pointing to his t-shirt, emblazoned with Jim Fitzpatrick’s rendering of Alberto Korda’s (in)famous 1960 image of Che Guevara, and Burger King – featuring Prince Charles wearing a Burger King crown against a blue backdrop, were quite a refreshment due to the lack of Banksy’s work in 2006. In 2008 Dolk and Pøbel started a new project called Ghetto Spedalsk with the aim to expand urban art to no man’s land in the far Norway’s north, by painting 20 stencils on abandoned house. In 2010 the exercise yard of the Halden prison in Norway was decorated with three large scale murals made by Dolk. One piece represented a prisoner in classic striped uniform complete with ball and chain, another print displayed a runner about to cross a finishing line made of police do not cross tape. During 2011 he had the honor to put up his artwork at the main train stations in Oslo and Trondheim.

In 2006 Dolk makes a decision to swap the street for gallery walls, and end his underground style of doing illegal works

Dolk’s prints, canvases, murals and hand-made posters received a huge attention not only in Norway but in other countries as well. Dolk’s murals can be seen on walls in cities such as Melbourne, Copenhagen, London, Oslo, Lisbon, Stockholm, Barcelona, Prague, and Berlin. His first solo exhibition was in Oslo in 2011 at the OSL Contemporary Gallery. In 2012 he decorated the walls of the Norwegian School of Economics as a part of the project ……….Capitalism. Since 2006 he is a regular participant of the Nuart Festival in Stavanger, Norway. In 2008 his work was displayed at the Cans Festival in London.

Featured image: Dolk – Lofoten, 2008
All images copyright of the artist