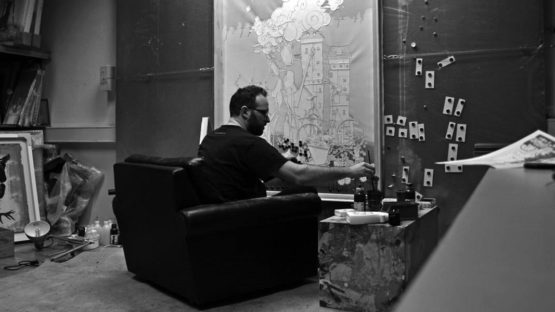 The illustrator and street-artist DOME lives and creates his art in the southwest German town of Karlsruhe. Fascinated by art in the streets he discovered spray paint as a medium in 1994 and started painting walls. He found his niche creating art that examines the human body and the human condition in a surrealistic manner.

In 2011 he had the idea to isolate parts of the body and draw them individually. He developed a system of “modular construction” where he can construct his artwork out of pieces that are drawn in increments of 45 degrees; a body part is drawn and then rotated 45 degrees and drawn again, and then again, etc. This method allows him the flexibility to quickly change a portion of the composition without starting the entire composition over. The parts are drawn on heavy paper and cut out so they are ready to be glued together for each new composition. Once everything is in place, he paints the subjects of his surreal world with pens, india ink and acrylic, and the figures come to life.

Just as a piece of music can unexpectedly transport us to a world of contemplation, his works invites the observer to stop and explore the thoughts and emotions experienced while gazing upon the surreal images before him.

Inspired by the baroque architecture, floral patterns, brackets and altars are included in his artwork. He often presents his figures  in landscapes, on stages and platforms, which are accompanied by banners of words with a font that was created by the artist himself.

He lives in his birth town, Karlsruhe.