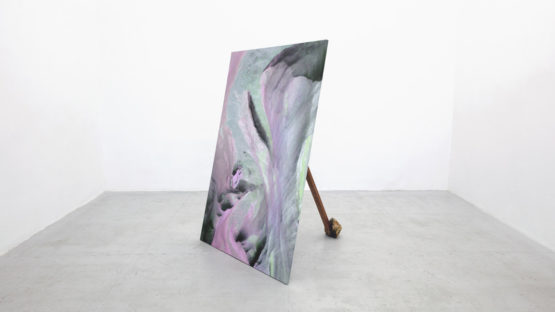 Doty/Glasco is the collaborative work of partners in art and in life, JR Doty, born 1981 in New Orleans, LA, and Joe Glasco, born 1988 in Chattanooga, Tennessee.  The two artists have been working individually for over ten years and began working together in 2013, developing their studio practice as a team.

The duo’s work utilizes an archive of 40 000 images made on the road over the last year. The images were taken in specific geographic locations such as Utah and the California Coast, because of their unique geological conditions. The images represent the essence of nature with an emphasis on the phenomena of time as it affects the landscape’s topography, such as rippling water, striations of marble and the constant changing of landforms. Photography plays an active role as the visual archive while the materials used serve to mirror the landscape’s natural movement through cycles of erosion and transformation. Each body of work focuses on abstractions of time using specific materials to create newly formed topography. By establishing a relationship between perception and materiality, the objects they create become material constructions of their perceptual responses to the land.

In Doty/Glasco’s practice, the works freeze the duality of accumulation and severance, making the power and fragility of the landscape and human’s relationship to it incomparably evident.

They live and work in Los Angeles, CA.