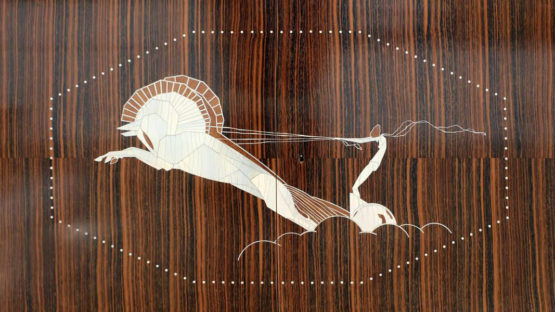 The special approach to wood as a material and it’s nobility entranced Émile-Jacques Ruhlmann and rounded his whole notable career. During the course or years, the artist’s vision became embodied in rather simple and cleansed style. Although Ruhlmann was affiliated with Art Nouveau movement, the objects he produced aesthetically somehow introduced Art Deco. His astounding skillfulness and focus allowed him to express his designs quite successfully.

Raised to Become An Artist

Émile-Jacques Ruhlmann was born in 1879 in Paris. He was born in a Protestant family and as a very young person, he started working in his father’s craft shop specialized in painting and mirrors. After his death in 1907, Ruhlmann started managing the business himself. The course of production changed to a more elaborate and modernized design governed by drawings of furniture the artist intended for his own apartment. In 1910 Ruhlmann showed the works at the Salon d’Automn and such a presence shortly after brings him new commissions and in general the increment of career. In 1919, he starts collaborating with Pierre Laurent by opening the company Ruhlmann et Laurent, specializing in interior design and producing luxury home goods that included furniture, wallpaper, and lighting. Finally, after few years, Ruhlmann opened his own woodworking shop with sections for lacquer, paint, and upholstery.

Despite the fact that Émile-Jacques Ruhlmann never was himself as a furniture maker, his drawings were technically so precise that there wasn’t any confusion when it came to the manufacturing and the artist always followed each stage of the process. The tendencies of the times certainly reflected on his own work, yet Ruhlmann was governed by the simple and refined solutions without any particular decoration. That is why his authentic style became recognizable and enabled him to be extremely productive.

The furniture and interior designs were sleek and luxurious

The Aesthetic of Émile-Jacques Ruhlmann

As the technology, fashion, and market grow, by the late 1920s there was a change of form towards more geometric shapes and stripped of furniture. That was not a problem for Ruhlmann since the artist somehow anticipated the new current. The use of the rarest woods such as ebony or Brazilian rosewood additionally accentuated the extravagance all along with the very simple forms and almost imperceptible curves. The pieces were often embellished with ivory which was used for the details. Exotic, yet profoundly simple material, the ivory brought a static sense of control to the pieces and made them unique, timeless and extremely elegant. On the other hand, the interiors were now additionally complemented with the design of new housing accessories like telephone, bar foot warmers, control panel for lights, opening doors and shutters.

The glamour of the Art Deco style immortalized in his furnituren

The Heritage of Notable Interiors

The client’s requests grow and the word spanned, so Ruhlmann became engaged in highly posh projects. For the interior design of Exposition des Arts Decoratifs in 1925, Émile-Jacques Ruhlmann realized a remarkable pavilion built by his friend the architect Pierre Patout. Two years later, the artist decorated the hall and the meeting room of the Chamber of Commerce in Paris, as well as the tea room of the liner Ile de France. Furthermore, he designed furniture and interiors for the voluptuous Elysee Palace, to the presidency of the National Assembly, for mayor of the fifth arrondissement of Paris. Although his work became rather fashionable, Ruhlmann never stopped thinking about the forms, lines, and composition regardless of the trend, so his exceptional wooden furniture was unmistakable known for high quality and extravagance.

Émile-Jacques Ruhlmann passed away in 1933, in Paris.