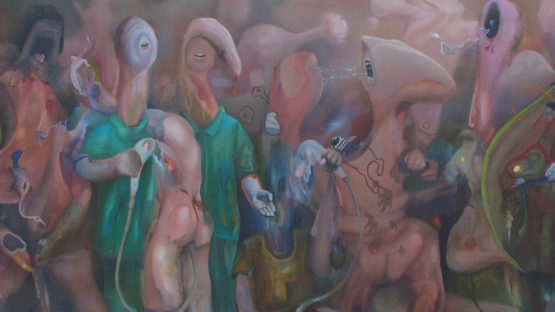 Connecting the unconnectable could be the working motto of Enej Gala, a young Slovenian artist, who builds a dynamic dialogue between hyper-realistic elements, almost photographic, and objects and various scenarios including very abstract and opaque foregrounds and backgrounds that simply force the viewer to adjust their perception to the content of the paintings, constantly changing their point of view. In his work, there’s unmistakably involved an element of symbolism, the Slovenian symbolism to be exact, perfectly capable of elevating itself into the universal human symbolism. The relationships between tradition and the contemporary world as well as the various concepts of history, characterized by a great capacity for meditation and reflections, are his main strategies in confronting the mythical narratives. Revealing the ideological viewpoints within the image, Gala follows a short circuit in human perception, further exploring his exceptional techniques.

A Figure both Hyper-realistic and Abstract

Highly interested in the relationship between tradition and contemporaneity, Gala refuses to stop at the point of the dialogue with the rural environment that has been the basis of Slovenian culture for centuries; he rather develops the comparison between art and agriculture all the way up to the contemporary world of hunting. A close attention is given to every detail, as even the names of his pieces fascinate the artist. In his desire to emphasize the significance of the process by which the knowledge, cunning, irony, wisdom, but also superstitions and ingenuity of the folk-tale were transmitted through writing and oral traditions, in synchronism with the history of the visual arts, he is fascinated by the dialectical relationship between the title of his works and his paintings, between word and image. Throughout history, many have tried to understand reality by depicting the world of agriculture or using the metaphor of an animal. Gala’s influences can be re-traced back to the great Pieter Bruegel, but also to the genuine spontaneity that specifically characterizes creative processes of the French Art Brut movement. Remaining faithful to possibly the only true trait of the Slovenian identity (the country’s borders, political and economic systems have changed many time over centuries), Gala establishes a strong connection with nature.

He is very interested in the relationship between tradition and contemporaneity

The Biography of Enej Gala

Born in Ljubljana in 1990, Gala moved to Italy, pursuing studies at the Academy of Fine Arts in Venice, where he graduated in 2013, but also earned his Master’s Degree two years later. Since 2010, he has participated in numerous exhibitions throughout Europe, and in 2015 he had his solo show, titled The Stable. The same year he was selected for the 31st International Biennale of graphic art in Ljubljana, and he won the prestigious Walking the Art Stonefly award, when jury, composed of Alessandra Galletta, Bruna Roccasalva, Marco Tagliafierro and Alice Ginaldi decided that the work by Enej Gala was the winner of the sixth edition of the award.

He is represented by A plus A gallery in Venice.

Featured image: Enej Gala – Bathers (detail), 2013
All images courtesy of A plus A gallery