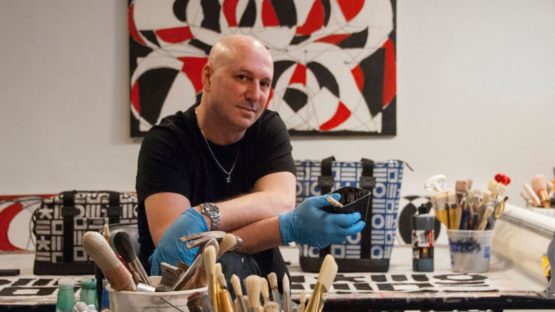 Eric Haze is a graffiti artist and designer born in New York City in 1961. Working on a variety of mediums for over three decades, Haze is best known for designs that span the art, graphic design and fashion arenas.

Haze started out as a graffiti writer in 1972 on the streets of Manhattan’s Upper West Side. Tagging the walls and subways of New York City he was using the name “SE3”, before adopting the identity of “Haze”. Collaborating with crews such as RTW and Soul Artists, Haze established his name at New York scene and developed unique letter forms as well as an extremely distinguished hand style.

After graffiti bombing the streets of NYC in the 70’s, Haze spent the early 80’s observing and exhibiting alongside iconic artists such as Andy Warhol, Robert Mapplethorpe, Keith Haring and Jean-Michel Basquiat. Though Haze experienced success in the gallery scene, he opted for something for which he held more passion – graphic design. In the mid 80′s, Haze studied design at the School of Visual Arts and opened his own studio in 1986, becoming one of the first visual artists to define the look and graphic language of Hip Hop during its golden years. Some of his most classic works include designs for Tommy Boy Records, Cold Chillin and EPMD in addition to LP sleeves for Public Enemy, The Beastie Boys, LL Cool J and many others.

In 1990 Eric Haze moved from New York City to Los Angeles, California. Three years later, he founded the company Hyperformance Inc. which designs an internationally distributed clothing line, jewelry and furniture. The “HAZE” tag he refined on New York’s subways now adorns many of the company’s products. Haze’s clothing remains recognized worldwide as one of the original brands that helped create the blueprint for street wear and urban products. He has his own limited edition versions of G-Shock, Nike, and New Balance shoes.

In 1997, HAZE collaborated with DJ Premier on New York Reality Check, a compilation reflecting the state of New York underground Hip Hop. The CD is arranged and presented by Haze and mixed by DJ Premier. DJ and record producer, Premier is best known for being one half of the rap duo Gang Starr. Haze’s roots as a subway artist and his eagerness to explore new ground have proven to be an excellent combination for success.

In 2008, Haze returned to the fine art world with a solo exhibition titled Full Circle at the MoCA, Hong Kong. In Full Circle, artist transformed the gallery into a bold environment of his signature hand styles and letterforms, and a display of free associative approach to shape and color. The exhibition included 15 drawings on paper, 15 large-scale hand-painted acrylic canvases, 10 archival silkscreen prints on canvas, plus several standalone one-off pieces created in both paint and ink.

Since Full Circle exhibition, Eric Haze has re-emerged cementing his place in the fine arts with several solo and group exhibitions in New York, Los Angeles, Amsterdam and Hong Kong. His work has been featured in notable galleries and museums including MoMA, Fun Gallery and Known Gallery.
Present day, Haze continues to direct his brand, art and a wide range of design work, as well as to collaborate with industry leaders such as Nike, Casio, Honda, G-Shock, and Stussy.
Haze also appeared in the seminal documentary Style Wars and photos of his work appeared in the book Subway Art.
He has a Haze Brand store in the Harajuku neighborhood of Tokyo, Japan.

Eric Haze married artist and talk show host Rosie Perez on September 15, 2013 in Las Vegas. The couple decided to get married the night before while attending the Floyd Mayweather vs. Saúl Álvarez boxing match.