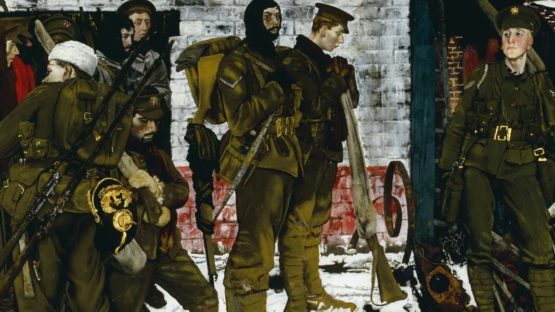 Eric Henri Kennington (12 March 1888 – 13 April 1960) was an English sculptor, artist and illustrator, and an official war artist in both World Wars. As a war artist, Kennington specialised in depictions of the daily hardships endured by soldiers and airmen. In the inter-war years he worked mostly on portraits and a number of book illustrations. The most notable of his book illustrations were for T. E. Lawrence’s Seven Pillars of Wisdom. Kennington was also a gifted sculptor, best known for his 1926 monument, in Battersea Park, to the 24th Division, for his work on the Shakespeare Memorial Theatre in Stratford-upon-Avon and for the tomb effigy of Lawrence at Wareham in Dorset.