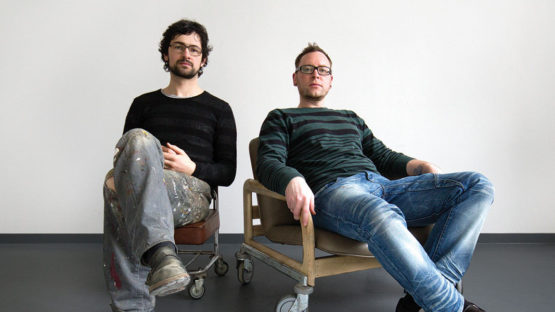 ETAW (Exit through a wormhole) is a conceptual cooperation between the two Berlin based artists Steffen Kasperavicius, born  in 1979 in Sigmaringen, Germany and Jorge Lopes born in 1981 in Lisbon, Portugal.

By a common formal rearrangement or scenic process of wooden, electronic, textile or metallic found objects from the street, junk yard or road works, ETAW examines the essence and value of outcasted and non-functional materials. The interest of both artists therefor is not only for construction, but also for deconstruction, extraction of signs, surfaces and aesthetics as well as of rests and progresses of degradation of nature and society. An attitude which distrusts the permanence and the static.

After periodical cycles of collecting, interchange, discussion and material exploration lead to answers in form of composed objects, vivid sculptures and room installations. This enables irritating bordercrossings between applied design and visual contemporary fineart. In addition to subtle furniture such as cryptic rolling chairs, weapon-commods, lamps or idiosyncratic tables, simultaneously room-expansive material sketches, photography or poetic object constellations and miniatures may consist. The source material for their work just appears well-known and unknown at the same time, due to the artistic treatment, and creates the requirement for complex new discoveries in the fusion of different contexts.

The experiences of both artists from disciplines such as sculpture, media arts, painting and curation as well as respective conceptual priorities such as space, time, (anti-)interaction or gesture and color are linked to a common series of works and are presented as original artistic vision.