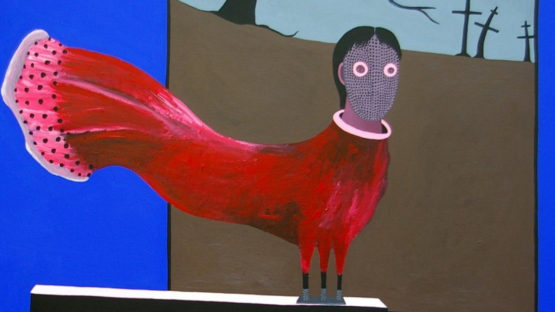 Exuberant, mysterious, and magical at the same time, the polymorphic work of Francisco Sepùlveda, a Chilean contemporary artist, abounds with references to its South American roots and the different cultures to which it has been exposed during its numerous and incessant voyages. The critics look at this work and talk about the “Sepulveda Galaxy”, the palette of gods and compare it with a merry ogre with thunderous laughter, a voracious and insatiable giant, devouring universes. With his first exhibition dating back in 1995, he now regularly displays his works in France, Germany, Switzerland, and the United States of America. The artist has studied drawing, painting, and engraving at the School of Fine Arts in Santiago and then at the Atelier Wilfredo Lam, where he has explored the experimental techniques of Engraving.

The Art of Francisco Sepùlveda

The work of Francisco Sepùlveda is an essentially open work, for none of his paintings is ever enclosed within himself. Everybody on the surface calls the viewers. The singular figures, propelled like the front of the canvas by the breath of their aerial dance, launch to meet us multiple signs. All the physical and mental elements, mobilized by the artist to create his work, are crossed by a magnetic wave that manifests its strange charm in each canvas. Each canvas is a planet that gravitates into the galaxy of an astonishing universe. Every single artwork reaches the viewers and imposes itself almost instantaneously as the visual material releases its graphic power in the pictorial space with all its power of expression. It is thus, almost immediately, in the pleasure of the eyes and conflagration of the senses, and at the point of impact of the first shock of perceptions and sensations, that the encounter takes place, that the observers’ relationship with the work is knotted. And it is in the vibrant prolongation of this initial, jubilant and intriguing contact that it is necessary to ask the question of the relationship between graphics and painting and, corollary, that of the relationship between figure and background. All images take their sources at the point of intersection where the conscious ideas intersect with the liberated psychic forces and the impulses of a surprising productive unconscious. This is why technical control and mastery leave a large place to the spontaneity and the random, integrating a strong capacity of free improvisation. Indeed, this constructive rigor and this freedom of improvisation are both necessary for the invisible wings of the mystery to thrill the unknown in painting. This regime of bipolar force is necessary for a magic to quiver and for spirits to manifest.

The polymorphic work of Francisco Sepùlveda (he adds engraving, monotypes, lithography and sculpture to his painterly practice) is not only animated by a formidable and enthusiastic desire to create but burning through the splendor of a vertiginous vision of the perceived world and felt through the crystalline prism of a creative imagination. This imaginary, immediately superimposed, carries away in its luminous flight the real to transform it and free it from the routine shackles of constraining logics, thus realizing as the great aesthetic re-conquest of the world by plastic means. Through this crystalline prism and in this tension of fire defying space and time that Francisco Sepùlveda, with his rational mind, his instinctive sensitivity, and his intuitive intelligence, gives the real chance to not miss Imagination and the imagination of not lacking in reality. And it is firmly and generously anchored on the gravid ground of a magnetic earth that it adjusts the real to the measurements and excesses of its visions, and the painting to its moving horizon.

He is represented by Galerie 22.